According to various reports, the Beautiful Manasugalu actress kept this news under wraps because she wanted to get away from the chaotic city life. 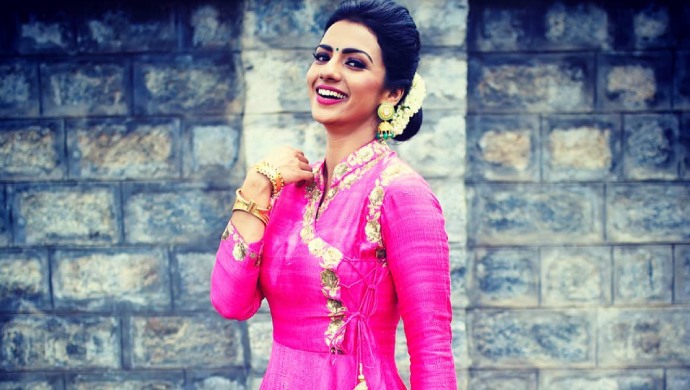 After giving us hits like Lucia, Beautiful Manasugalu and Happy New Year, along with cameo performances in films like Raambo 2 and Rajaratha, actress Sruthi Hariharan recently went off the radar and why? We found out that on Tuesday, the actress posted a blurry image of herself along with a baby bump on her Insta page to pique the curiosity of the fans. In an interview with a leading media daily, the actress explained why it was important for her to get away from the city-madness while dealing with this completely new phase of life. After seven years of dating her beau Raam Kumar, Sruthi finally tied the knot with him sometime in early 2018. And now we all can expect some good news because she is going to be a mommy real soon.

According to various cited reports, the actress in her third trimester. We also learnt that her friends had recently given a cute baby shower for her and Sruthi was all smiles. Check out the video here…

#majorthrowback🔙 When your closest friends decide that it's time for some fun and throw you an (almost surprise) baby shower 😊 Thank you @kasmaker @vyduryalokesh, @yashaswini.gurulingaiah and @joel.kushalappa for putting it all together❤, that too in a space I was craving to eat from😌 #thepermitroombangalore (their curd rice starters are to die for). Also thank you for coming and adding to all the fun and love @swa_chakra @suchitasr @arundathi_anjanappa @shachinaheggar @srain_a @appaiahz . We missed you @raam.kalari @sumanark23 @shreyankakr & sangeeta Iyer. . Lastly a big shout out to @thedesignercakemaker for the absolutely delicious cake . Thank you neha for that one 😍 #welcometothecircuslittlepeanut

Now for that blurry baby-bump image, we were talking about earlier…

To actually feel life beating within you …. to know that this is the beginning of a whole new journey .. and to finally acknowledge that clarity is over rated and sometimes it's all about the blur – brings us to this point 👶😊❣ Welcome to the circus little peanut ❤ We can't wait to see you 😊😊 PC : the super excited father to be @raam.kalari ❤🤸‍♂️ #babybump #fatandfabulous #waiting #excited #nervous #motherhood #talkingtothetummy #chilling #readytopop #swollenlimbs #scansandreflections

So, getting back to the interview, Sruthi Hariharan revealed many things. Firstly, it was her deliberate choice to stay off the radar and enjoy the whole process (of her pregnancy). Her next intention behind taking this step was the feeling of losing herself in the race/crowd. Basically, Sruthi’s pregnancy came as a blessing to her and she welcomed it with a loving embrace. About her ongoing work, she said, “Over four to five months, I wrapped up all the pending work that I had, which included dubbing for my upcoming projects, and ensured I was completely free. Since then, I have been enjoying my vacation, which has been time off from social media as well.”

For those of you who don’t know where the actress was for all these months, she was embracing nature in her mother’s home state, Kerala. According to the actress, her husband too hails from the same state so she found it only fitting to take time off there for the course of her pregnancy.

We sincerely hope to see the actress back on screen really soon. If you are a fan, don’t forget to send in your best wishes to the Beautiful Manasugalu actress, in the space given below.

Watch Sruthi in the hit song Elli Kaan Elli Kaaneno, from the film Raambo 2, by streaming it on your ZEE5.

Kiccha Sudeep On Pailwaan: All Along, I Thought That I Was Fit Enough, Until...