Do You Know Why Paaru And Aditya Are Married For Real? The Answer Lies In 3 Knots

Did you know the actual meaning behind the three sacred knots in a ritual we call Mangalya Dharana? 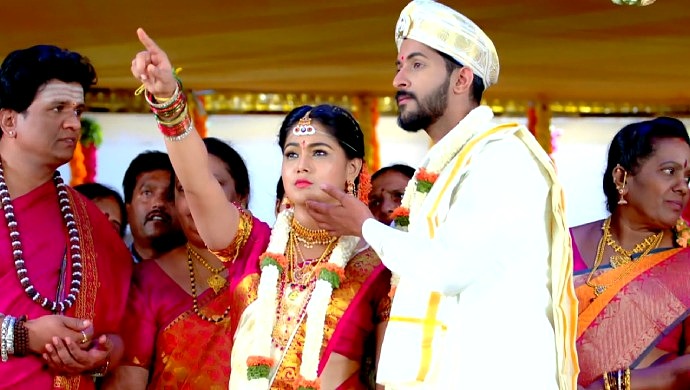 Recently, on the hit TV serial Paaru, airing on Zee Kannada, you must have seen how Aditya and Paaru accidentally get married during the dummy shoot for the herbal product company. Many of us wondered what will happen when Akhila finds out because she preaches marriage as a sacred thing for a young man and woman, who are to spend their life together. Today I will tell you a couple of things as to why according to us Aditya and Paaru are wed for real.

The basic essence of a Kannadathi wedding is something known as Mangalya Dharana. While Mangalya means auspicious things, Dharana means wearing or donning. So during a wedding ceremony, you must have noticed the priest saying the words Mangalya Dharana more than once. The sacred yellow thread tied by the groom is a symbolisation of the fact that he will provide her with commitment, safety and security throughout their lifetime.

Now coming to the fact of how Paaru’s wedding became real. Remember when the spot boy ran to the temple and got the very same sacred thread that Hanumantha had asked the priest to bless for his girl? It so happened that apparently by the time the spot boy reached the thread, the priest had already blessed it for the long married life of the bride and groom. The second instance why it would be an actual marriage for Aditya and Paaru is when the former tied three knots around the latter’s neck unknowingly.

The three knots have individual meanings. First, it represents three different features of your body. The first feature is Sthula Sharira, which means the entire being or gross body. Next is Sulagna Sharira, meaning the astral body. Last comes the Karana Sharira, which means the enlightened body and is a doorway to higher consciousness. The other interpretation of the three knots lies in the commitment aspect. They are believing it (Manasa), saying it (Vacha) and executing it (karmana).

These are a few reasons why we think the Aditya and Paaru are married, for real. While this may seem like an outdated concept to many, Akhilandeshwari lives by these rules and her faith is the verdict!

Do you agree with Akhila? Speak to us through the space given below.

Watch Rajaratha to know what a modern-day love story looks like, streaming in HD on ZEE5!

To Learn The Different Rules Of Chemistry From A Man Named Kariappa, Stream The Film Chemistry Of Kariappa Only On ZEE5