DKDFW2 Weekly Recap: The Zee Kannada Kutumba Geared Up For The ‘Family’ Round Challenge 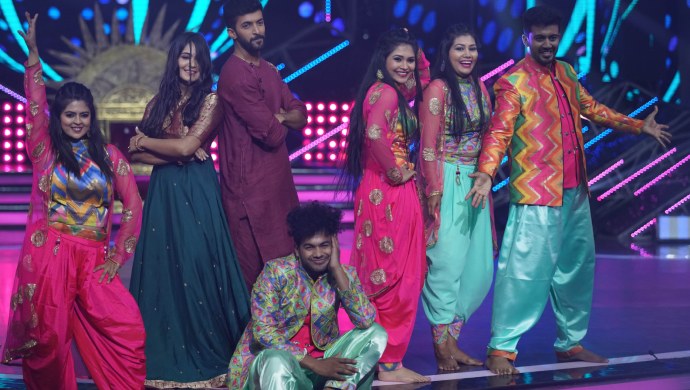 Last weekend Dance Karnataka Dance Family War 2 had probably the best set of episodes so far because everyone including the judges and participants had nothing but fun. The sizzling hostess Anushree, who had donned a white-and-green semi-formal attire that gave her a ‘lady-boss’ look, started the proceedings.

This time, it was the ‘Family Round’ which meant that not only the Zee Kannada Kutumba members came on the show to support their onscreen family members but the real family of some contestants were there too.

You must have already checked out the EXCLUSIVE collection of images we put up earlier so without further ado, let’s quickly recap the highlights of last week, shall we?

As you can see in the clip, these four young talents more than impressed the audience, judges and other contestants with their performance on the song He Navile from the Crazy Star film Kalavida. After a standing ovation, Rakshitha Prem proudly gave them a ‘Fire-Brand-Performance’ for their excellent act.

Shiny and Hanumantha danced to a folksy song, Chamundi Bettakke Hogu from the 2002 Kannada film ‘123‘. They were accompanied by Lahari from Drama Juniors and Gnanesha-Sunil from the Sa Re Ga Ma Pa Kutumba. For their super-entertaining performance, they were given the ‘Fire-Brand-Performance’ too.

3. Sarika and Adithi from Gattimela

Dancing as conjoined twins and bringing out the emotional appeal of the audience were Sarika and Adithi from the superhit show Gattimela. They were so involved in the act that they themselves couldn’t control their tears at the end of the performance. For their splendid synchronisation and a good concept, they were given the ‘Fire-Brand-Performance’.

Impanna and Chenappa of Sa Re Ga Ma Pa fame came on the show to dance with their buddies Hiranmayi and Soorya from the off-air show Mahadevi on Zee Kannada. Their performance on the DBoss song Airavatha impressed everyone in the studio.

5. Suraj-Minchu along with Hitesh, Anish and Raghu from the Comedy Khiladigalu family

Taking the retro route were Comedy Khiladigalu’s Suraj and Minchu, whose performance on the song Kuchiku Kuchiku from the film Diggajaru was more than hilarious. Their family member aka other contestants from the CK show, Anish, Hitesh and Raghu did well to support the act.

Check out how well the entire group has performed. Right after their performance without saying another word, the judges gave them a ‘Fire-Brand-Performance‘ straight away.

This was one of our favourite acts of the evening simply because we got to see our favourite stars all together on one stage. All the judges and Anushree included had a lot of fun watching these seven perform on the show last weekend.

8. Pranathi and Tejas with their real-life families

While the performance of Pranathi and Tejas was quite emotional, at the end of the act, Anushree introduced Tejas’s real family to the judges and audience along with Pranathi’s grandmother. Praising their support for their wards Anushree then called upon Subbu, who was Pranathi’s earlier partner to say a few words of support.

The cutest contestants of the show — Jnana and Alaap — chose a Krishna theme. But guess who came to show her support? The adorable princess Parnika from the Sa Re Ga Ma Pa Li’l Champs fame was dressed cutely like Jnana and the trio moved the judge’s hearts’ with their lovely act.

10. Ashok-Bhavani with Dheeksha, Harsha, Anup and Aishwarya from the Drama Juniors family

The final act of the evening was an adorable love story that was portrayed by Ashok-Bhavani from Aathma Bandhana and the tiny tots of Drama Juniors. For their super-entertaining act, this team got the ‘Fire-Brand-Performance’.

Dazzling Performance of the Week: Adithi

Jodi of the Week: Anoop and Dimpanna

Sweetest Performance of the Week: Ashok and Bhavani

Next Challenge: In the next round, individuals who are not part of the Zee Kannada Kutumba will come on the show and perform with the participating jodis.

Excited? Stay tuned to this weekend’s episodes of DKDFW2.

Watch Natasaarvabhowma, for entertainment on ZEE5.

Inspired By Hebbuli, Here Are 5 Places In Karnataka That Are Perfect For Weekend…

Inspired By Deepika Das’s Vacation To Coorg, Your Itinerary For A Two-Day…

Watch The Twisted Love Triangle Huliraya, Streaming On ZEE5 For Your Entertainment