Last week on Dance Karnataka Dance Family War 2, each team competed against another team on the same song and here is a recap of the flawless results! 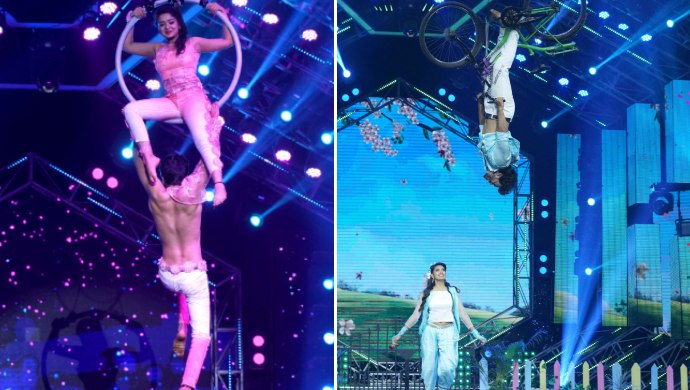 Last week’s ‘Challenge Round’ was one of the best rounds in the second season of Dance Karnataka Dance Family War.  And trust us, it was as challenging as it sounds. The rules were simple, two teams had to compete against each other on the same song and win. But the interesting part was that before the performances, the two teams were called to the stage along with their choreographers and a coin was tossed.

The choreographer of the winning team had to decide if their team would go first, or their competitors. Once the act of the first team was over, they had to stand outside the sets and the judges gave comments to each team separately. After that, the results were revealed in the end.

A special surprise came in the form of one of India’s best choreographers from north to south, Chinni Prakash master, who was the judge in place of Arjun Janya, who couldn’t be present last week for personal reasons. While we still have the danger zone to begin on the show, let’s see if some teams were selected for elimination or not…

The toss was won by Shashi master, who chose his team aka Prekshith-Anwisha to dance first.The Drama Juniors contestants and rivals for this round, Prekshith-Anwisha and Anoop-Dimpanna danced on the song Hrudaya Samudra Kalaki from the movie Ashwamedha.  And guess what? Both the teams baffled the trio of judges and the result was a tie!

While these two tiny tots are the special contestants of the show, your heart is sure to turn to mush after seeing this clip above. Recreating the magic between the Crazy Star and Juhi Chawla in the film Premaloka, little Jnana and Alaap rocked the stage with their adorable performance.

Soorya-Hiranmayi won the toss and their choreographer decided to send them first. The chosen song, Aata Hudugatavo, was from the Crazy Star film Hatavadi, and both the teams performed exceptionally well. However, the results favoured Soorya and Hiranmayi as the winners.

The toss was won by Arun master, aka Adithi-Vicky’s team who also decided that his team would go first. Dancing to the tunes of the evergreen song Jotheyali Jothe Jotheyali from the film Geetha, both the teams of Adithi-Vicky and Tejas-Pranathi, took up the challenge of an aerial act. While the first team did the aerial act with a hoop, the latter chose a bicycle-aerial act. Due to both the acts being absolutely flawless, the green signal was given to the two teams.

Pavan Master, choreographer of Shiny-Hanumantha won the toss and sent his team first. Unfortunately due to a severe injury in Lokesh’s leg, Manthana performed solo for another week without him. Dancing to the tunes of the Kailash Kher song, Yakka Nin Maglu, both the teams entertained the judges. However, Hanumantha-Shiny were the winners of the round in the end.

Manju and Arun Masters, the choreographers of the two teams, were called on stage for the toss and latter won. He too chose his team, i.e, Suraj and Minchu to perform first. Both the teams performed on Premalokada Parijathave from the movie Jaana and impressed the judges with their romantic prowess. Two brownie points for you if you guessed that Suraj-Minchu won this challenge.

Smile Performance of the Week: Tejas and Pranathi

Dazzling Performance of the Week: Vicky and Adithi

Jodi of the Week: Prekshith-Anwisha

Next Week’s Challenge: The next week’s challenge as said by Vijay sir is the ‘Maha’ round. To know more details stay tuned.

Watch Chemistry Of Kariyappa for more entertainment on ZEE5.

If You Too Love Rap Songs, You Cannot Miss This Special Rap Song By Aditya Parashar And Vanditha For The ZEE5 Kannada Original Film Bhinna, Releasing Tomorrow On ZEE5