Although Suresha was the showstopper in this unique Kannada film, it is important to deduce whether Lachi was better suited to him or Malli. 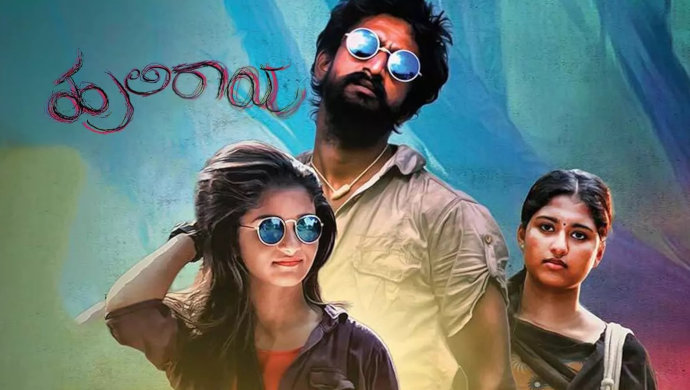 Huliraya’s director Aravind Kaushik has put some careful thought into constructing the whole film. Right from using an almost new cast, all the way to the background score, the film reflects perfection. One of the best thriller-dramas of 2017, Huliraya is a must watch for anyone who is a virtual thrill-seeker. Starring in the lead is Balu Nagendra, who plays the peculiar role of Suresaa, a man who has never stepped out of the comfort of his home, the forest.

Suressa chemistry between Lachi and Malli can be judged here:

When Suressa falls in love with Malli, he is driven to prove himself to her father Giriyappa and reluctantly goes to the big city of Bengaluru. What happens after that splendidly forms the crux of the film. The female leads in Huliraya are played by Chirashree Anchan as Malli along with Divya Uruduga as Lachi. Although they both play sisters in the film, their personalities are as different as day and night.

Malli, the childhood crush of Suressa, has a timid personality which makes it easier for him to corner her for some alone time. While it isn’t clear if she too loved him as much as he did, it is very evident that her father is against their union. Unlike Malli, her younger sister Lachi is a different person altogether. She believes in living life on the edge as she is a total extrovert.

Chirashree and Divya surely must have practiced a great deal for their respective roles. In an ideal situation, the character of Lachi is what defines the perfect partner for a man like Suressa. I say this because she gave his character a good direction in the movie. Lachi was a strong-headed young lady, who took to liking Suressa as soon as she understood what’s going on. She also knew exactly what she wanted from him as a partner.

We were, however, disappointed that the character of Lachi wasn’t introduced earlier in the film. In other words, Divya absolutely deserved more screen time. If you still haven’t watched this movie, watch it right away and let us know your thoughts.

Also, whom do you think paired best against the character of Suressa and why? The comments space below awaits your thoughts.

Let us know what you would rate the song on a scale of 1-10 in the comments section! Tune into Zee5 to watch Namaste England now.

Bramhagantu's Bharath Bopanna Will Totally Turn Your Frown Upside Down

Sa Re Ga Ma Pa Li’l Champs 16 Recap: Puttanigalus Outdid Themselves In The Evergreen Round