Did You Know That Holi Is Called Kama Mahotsav In South India?

In Hampi, Holi is celebrated with colours, pomp and splendour. Namma Kamali celebrating Holi is the perfect reference for you. 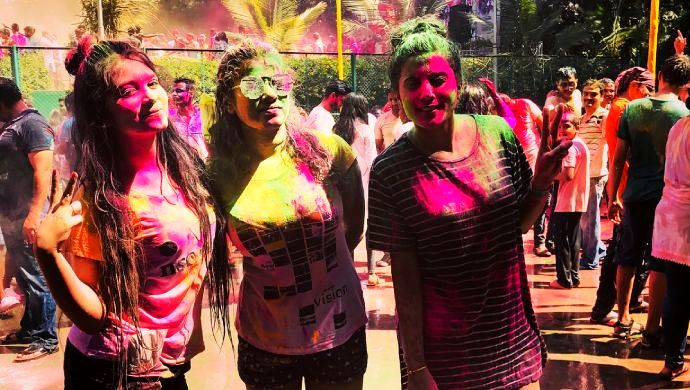 While Holi is celebrated as the festival of colours in many parts of the country, in South India the festival has a different significance altogether. In the north, it is a celebration of a good harvest as well as the opportunity to get together with your loved ones.

However, down South, Holi is not even called that. Instead, it is known as the Kama Mahotsav which is dedicated to Kamdev, the God of Love! Nevertheless, many people still call it Holi and concentrate on the colours used during the celebrations. Take Namma Kamali for example, by the looks of it, she had a great time during Holi last year.

So what does Kama Mahotsav or Holi signify in the South? These interesting facts will keep you well-informed.

2. How Kama Mahotsav day is celebrated

Followers of the Kamdev generally spend the whole day singing songs and praises. These are in the form of stories about the Lord and his wife Rati.

3. What happened on the day of Madan Mahotsav?

Legend has it that Lord Shiva burnt Kamdev into ashes before resurrecting him. This he did because of the cries of his wife Rati. A significant full moon is said to have shone brightly that night!

4. Hampi and many other places still are breaking the stereotype

Holi in the real sense is all about having fun right? The citizens of the historically rich town of Hampi believe this and hence allow colours to be part of the celebration. Also, the hippie-town of Hampi hosts many international tourists every year during this time, so another reason why they rarely say no to applying colours and having fun!

Are you excited for the festival this year? Share with us your plans for Holi in the space provided below.

Did you know that you can stream your favourite shows on ZEE5 before they are aired on TV? Click here to browse.

If You Love Family Dramas, Watch The Puneeth Rajkumar Starrer Doddmane Hudga Tonight While Having Dinner