Did You Know That Akhilandeshwari Amma Has Found A Prospective Groom For Namma Paaru?

Do you think Akhila's matchmaking for Paaru will succeed before Damini intervenes and spoils everything? 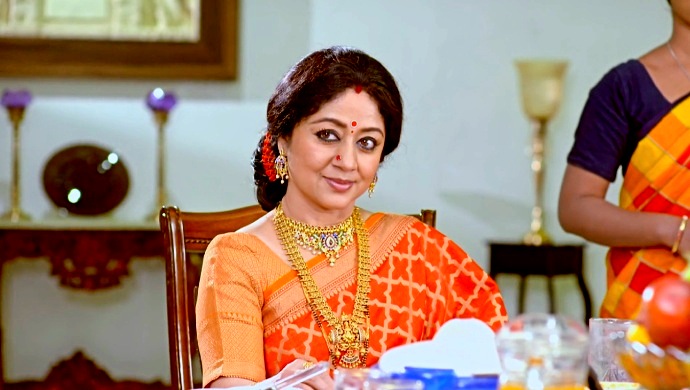 Last week on Paaru, the family enjoyed the festival of Holi together and what fun they had! By the end of the week though, we got some good news for Namma Parvathi Hanumantha, thanks to her boss, Arasane Koteya Akhilandeshwari.

So how did Paaru’s prospective groom land up in Akhilandeshwari’s house? Well, Aditya’s known acquaintance, Harish, who designed the logo for his herbal product company, comes to the house in search of a job. Impressed with his passion to learn, Aditya immediately offers a job to Harish and invites him home for lunch.

Looking at the two together, an idea pops into Akhila’s mind and she seems quite satisfied with her decision. As the luncheon proceeds, Aditya’s mother discusses marriage with Harish, who becomes conscious and avoids the topic. She further insists that just like how he got a job in her company, that she will find him a suitable bride. An excited Harish accepts!

However, Damini, who is annoyed that Akhila will be spending so much on Paaru’s wedding, plans to destroy any happiness from the kelsadoulu’s life. Her first plan to get Paaru insulted fails, following which she makes a promise to ruin any dreams the former had for her wedding.

How many of you think that Akhila’s plan will work? Cast your vote in the space below to let us know if you think Akhila will win or Damini.