Want to know why Gattimela is her favourite? Find out other EXCLUSIVE information about the actress like her chemistry with Shanaya and more, here. 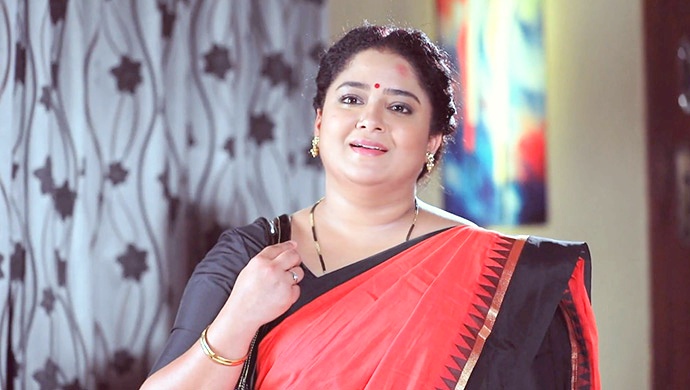 Deepa Bhaskar, who is famous for the role of Subbalakshmi Gurumurthy on the hit Zee Kannada show Subbalakshmi Samsara, is an experienced actress and rightfully so. Armed with good theatre experience, Deepa got the chance to play the role of an innocent and orthodox housewife, Subbalakshmi, whose tragedy is that her husband is having an affair. Not with just any random person, but his own secretary, Shanaya.

For over 570 episodes now, the show has thoroughly kept us entertained and has been quite an inspirational journey if you ask me. However, in a recent interview that I conducted with Deepa, she revealed why Subbi is an old school person. Not only that, but the beautiful actress also got talking about Subbalakshmi’s onscreen relationship with Arun Prasad, Deepa’s chemistry with Samikshaa, aka Shanaya and much more. Keep scrolling for all the juicy excerpts…

Q. What is your chemistry with Shanaya aka Samikshaa in real life?
A. Well, on-screen we are like a snake and a mongoose but off-screen she goes ‘Deepakkaaaa’, she comes running and jumps on me. She is on my lap all the time and I am feeding her all the time. Like I said you know it is a Samsara where I have children and she is one of my children. There’s one Atharva and then there is Samikshaa. She might be that sexy babe you’ll see onscreen but offscreen she is a baby (chuckles). That’s how we are and it has been fantastic working with her. I can see how the actor in her has just grown exponentially and I really wish her well.

Q. Why did it not work out between Arun Prasad and Subbi, can you elaborate a little?
A. See it is very easy for us as city girls to think about the situation and you know just move on. But for Subbalakshmi moving on is the hardest thing that can happen to her. She is someone who believes that her husband is her life all through her life. So, all of a sudden for her to see and accept somebody else in that position is very difficult. She can be a mother, she can be a sister, she can be a daughter-in-law, she can be a daughter, she can be anything but she’s the wife only of Gurumurthy’s.

You might call that a typical mentality or you can even call her old-fashioned because this is what she believes. If you look back or turn around and look at your grandmother or look at your mother or even look at any relatives who are you know about fifty years or so, you would find them contemporary today but if you ask their ideas and thoughts, you might find it old school. But I would say it is something, it is a strong belief that kept their families going so far.

Q. Did a lot of preparation go into playing the character of Subbi, whose husband is having an affair?
A. You know actually, preparing for this role wasn’t difficult at all because the affair was mostly behind my (Subbalakshmi’s) back. So it wasn’t difficult to prepare for that part. However, to prepare to be as innocent as Subbalakshmi was very difficult (laughs). Like I keep saying it is very easy for us to say ‘Oh man, if he wants to get out this relationship, just give him what he wants and let him go’. That’s what is the mentality today.

Now, to prepare to be that innocent and believe everything that is happening in front of her, I think was a great challenge to me. Not that I don’t believe it in my real life but as innocent as Subbalakshmi, I think, there can be nobody. Because even when I go out today and when I meet people today, they’re like ‘DO NOT trust him, DO NOT trust him’. I even have old women telling me this. They come to me and they are like ‘DO NOT trust him they are cheating on you. He is cheating behind your back, DON’T trust him’. And I am like ‘Okay fine!’ (laughs).

So I think you know being innocent, being so naive was what was difficult for me to prepare and it happened eventually. It happened with the help of my director, with the script-writer, with the screenplay writer, with my actors around. It was a team effort you know screwing every character into its place took some time but then it a beautiful process during the first few months.

Q. Any interesting twists coming up?
A. Well, (chuckles) I am not sure if I am at the liberty to give out information but I will give you a small hint to the best of my abilities. You must have heard of the saying ‘Looks are deceptive?’ So what if Subbalakshmi were soon to realise this? Now, Arun Prasad is sort of aware of the situation, Anand also has an idea, even Shanaya’s friend is in the loop. The question is, Is Subbi’s happiness or rather Samsara, temporary? That’s all that I can say at the moment.

Q. Any other show you are following on ZEE Kannada?
A. I actually like all the non-fiction shows, honestly. I love watching Sa Re Ga Ma Pa, I love watching Dance Karnataka Dance. Even the one with kids, Drama Juniors, these are all my favourite shows on Zee Kannada. But other than that, in fiction I used to love watching Jodi Hakki, I still love watching Gattimela, I like Paaru.

Gattimela is like my current favourite you know, even during the set when we are shooting, a couple of my friends on the sets and myself, we discuss about what happened on Gattimela and we go to ZEE5 and find out, because we are mostly at the shoot and we don’t get that time to sit at home and watch it live. So we go to ZEE5 and that’s where we catch up on the show. So these are a couple of my favourite shows.

Send in your best wishes to the lovely actress in the space given below and don’t forget to stay tuned for the final part of this EXCLUSIVE interview, coming soon!

If You Are A Fan Of Inspirational Stories, Don't Miss Watching The ZEE5 Original Series Kaafir, Now Streaming In Kannada