Last week, judge Arjun Janya couldn't attend the show so the judges' scores were revised to 20 marks. A little human entered the competition too! 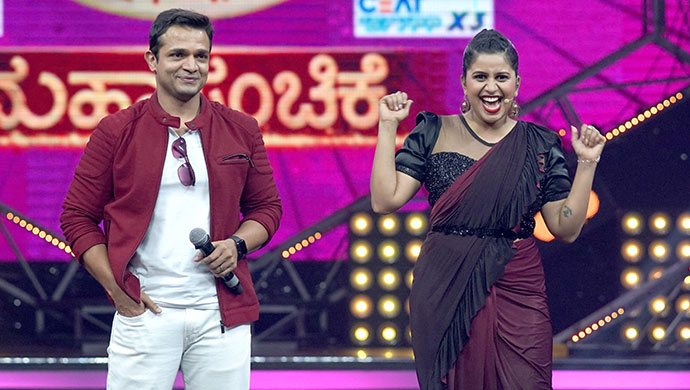 With a zealous welcome to all the fans and viewers of the show, hostess Anushree began the Mass-Round episode last week. Judges Rakshitha Prem and Vijay Raghavendra were also asked to say a few mass dialogues of actors like the D-Boss Darshan or even Shivanna. Anushree followed this with a fabulous dance performance with all the choreographers of the 11 jodis and Pranathi from Bramhagantu, that kept everyone thoroughly entertained. The song she chose to perform was the popular mass number ‘Mastu Mastu Hudugi Bandlu‘ from the Real-Star film ‘Upendra’.

Unfortunately, due to personal reasons, judge Arjun Janya wasn’t able to make it so Anushree informed the audience that the contestants will be marked only out of 20 this week. Without further ado, let’s look at all the rocking performances that happened last week in the ‘Mass-Round’ of Dance Karnataka Dance Family War Season 2.

Just a glimpse of their performance is enough to know what a brilliant take Anoop and Dimpanna, from the Drama Juniors fame, had on their ‘Mass-Round’ challenge. Their act was centred around the song Hubaliya Sheharadaga from the film Anna Thangi and both the judges loved it and gave them a ‘Fire-Brand-Performance’ tag followed by the Golden hats.

A power-packed performance of Anika from the show Kamali and Preethu from Paaru justified the ‘Mass-Round’. It was a narrative track inspired by the Ugramm title song, that mixed some famous ‘Mass’ dialogues with music. The act was enjoyed by both the judges, who gave the Anika and Preethu a cumulative score of 19/20.

Watch a glimpse of Anika-Preethu as well as Ashok-Bhavana’s performance, here:

Using Dr Rajkumar‘s song Huttidare Kannada from the film Aakasmika, Ashok and Bhavana from the show Aathma Bandhana made the judges proud with their performance. Doing much better than last week in the ‘Duet-Round’, these two actors scored 18/20 for their hemmeya performance.

The ‘Shepherd-Boy’ Hanumantha did a Kannada spin-off to the Avengers movies and gave a sakkath performance along with Shiny, his dance jodi. Their superhero performance on Maari Kannu Hori Myage from the film ‘A’ earned them  For those of you who don’t know, Hanumantha, Anoop and Adithi celebrated their birthday last week and as a surprise, all Dance Karnataka Dance Family War 2 members got them a huge cake. Their final score was 17.5/20.

Another surprise came in the form of little Gnana from the Sa Re Ga Ma Pa Li’l Champs Season 16 fame, as the judges allowed her to become a special contestant and perform every week henceforth. Thanks to Anushree, we can finally get some more ‘awww’ moments on the show because of this tiny tot

Performing on the Kichcha Sudeep film Pailwaan song Bandu Nodu Pailwaan, Prekshith and Anwisha gave the audience a literal ‘Fire-Brand-Performance’. This time Anushree and Vijay Raghavendra came down to give them a salute. Followed by this were the Golden hats by Rakshitha Prem.

From the Challenging Star Darshan film ‘Arjun‘, Suraj and Minchu performed on the hit ‘Mass’ song Ye Kanaka and won the judges heart instantly with their comedy touch. Their efforts were given an 18/20.

Still, a one-woman-army, Pranathi from Bramhagantu performed solo second week in a row and this time on the D-Boss song Kai Mugidu Yeru from his film ‘Saarathee’. Her performance on this power-packed song won the judges’ hearts and earned her a whopping 19/20.

The lead-duo of hit show Mahadevi danced on the Raghvendra Rajkumar song Colour Colour from the movie Swastika. With some constructive criticism and positive comments for both Hiranmayi and Soorya, both the judges cumulatively scored them 16.5/20.

Adithi and Vicky from the hit show on Zee Kannada, Gattimela danced amazingly on the song Gangeya Avana from the film Jogaiah. Their avatars looked apt for the song and the judges appreciated their act too. However, for their brilliant effort, both Rakshitha Prem and Vijay Raghavendra gave them a cumulative score of 16.5/20.

Dressed as a man, Nanditha danced opposite Anupama for the song Baare Baare from the hit D-Boss film Dattha. Their efforts were lauded by the judges and they received the compliment of doing much better than last week. The final scores were 15/20.

From the Prem Adda, Lokesh and Manthana from the Comedy Khiladigalu fame danced on the song Melkote Hudgi and their concept was quite unique. Even though they fell short of a full score, with some positive feedback as well as constructive criticism for both Lokesh and Manthana, the judges gave them 16/20.

Dressed in tribal outfits, both Barkath Ali and Ningi performed brilliantly on the song Lele Padi from the film Gandugali Kumara Rama. The judges had great fun talking to Ningi and Barkath after their performance and commended the latter for his fire-performance. Their total score was 15/20.

Dazzling performance of the week: Bhavana and Ashok

Jodi of the week: Preethu and Anika

Give a shout out to your favourite team or jodi, in the comments space provided for you below.

Watch Srimurali’s Mufti, if you are a fan, streaming here on ZEE5.