Dance Karnataka Dance Family War 2 Recap: The STORY ROUND Was Better Than Expected

Find out why Pallavi Gowda, aka Nanditha of Jodi Hakki, was missing last weekend on DKD Family War 2. Also, two other couples got full marks! 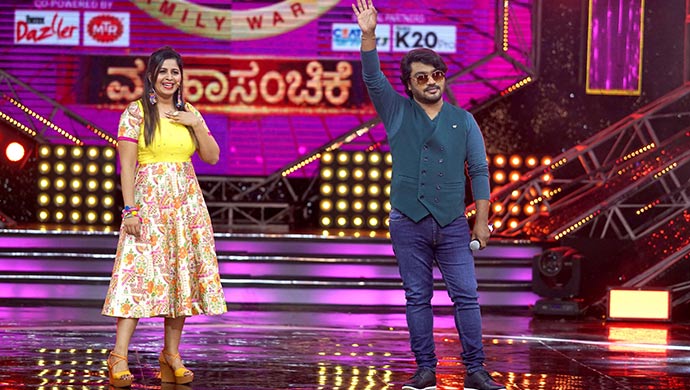 Last weekend Dance Karnataka Dance Family War 2 started with a unique welcome from host Anushree. She introduced the judges in the form of a story, of how they first entered Sandalwood.  Each story was wonderful to listen to and did you know that Rebel Queen Rakshita Prem‘s father was the cameraman of namma Chinnari Mutha’s first film? Such cool facts were presented to the fans about all three judges before the competition began.

There were quite a few interesting things that happened including anchor Anupama having to perform alone. However, Pranathi seems to still be performing solo, the third week into the competition. Will there be a change from next week? Let’s find out through the scorecard of each Jodi, here…

Telling the story of the birth of Ganesh, were Preethu and Anika from the Zee Kannada shows Paaru and Kamali, respectively. Playing the roles of Lord Ganesha’s parents Lord Shiva and Goddess Parvathi, the duo danced for the Shankar Mahadevan song ‘Ekadantaya Vakratundaya’. The end result was a standing ovation by all three judges, the ‘Fire-Brand-Performance’ tag as well as the golden hats by judge Rakshitha Prem.

With a combination of Jagave Ghora from the film 8MM Bullet and Sultana from the film KGF: Chapter 1, both Prekshith and Anwisha told the audience the story of the mighty eagle. The execution of the narration was brilliantly done that I challenge you not o get goosebumps while watching the performance in the video above! The second performance of the Story Round got another standing ovation from the judge trio along with the golden hats and then the ‘Fire-Brand-Performance’ tag.

3. Adithi and Vicky from Gattimela

Speaking about the exploitation of Mother Earth through the song Ninnalle from the film Endendigu, were Gattimela’s Adithi and Vicky. While the former played the character of Mother Earth, Vicky portrayed the protective O-Zone layer outside of Earth. Soon, with Vijay Prakash‘s song, Ilijaaru Haadi Idu from the film Kempegowda, the character of pollution came in and started ruining the earth. The performance was highly praised by all three judges, for the ideation and execution. Adithi and Vicky scored a whopping 28.5/30, in the end.

4. Anoop and Dimpanna from Drama Juniors

Bringing an emotional tale of the Karnataka floods were Anoop and Dimpanna from Drama Juniors. Enacting how the farmers, who lived a life of hard work and lots of prayers, were distraught and lost when Mother Nature lashed out in the form of heavy floods this year. The way these two little children portrayed these characters shows the urgency of uniting to protect nature (flora and fauna) instead of harming it.

This act got a well-deserving standing ovation from Arjun Janya. This was followed by 10 seconds of silence for all those who have lost their loved ones in the floods. Humbled by the performance, just Vijay Raghavendra decided not to score the children but promised that their performance will be recorded for future purposes.

5. Soorya and Hiranmayi from Mahadevi

From the Zee Kannada show Mahadevi, Soorya and Hiranmayi narrated an act of a blind man and how he learns about colours. The most interesting part of this act was that namma Soorya was completely blinded, that to the makeup artists, during the performance. Which means that he actually closed his eyes for the whole performance. The results you can see in the video above. The well-synchronised act with a unique concept made Vijay Raghavendra give them a standing ovation. Soon the ‘Fire-Brand-Performance’ tag was given to both of them followed by the golden hats.

With the songs Bit Hogbeda from the film Raambo 2 and Garbadhi from the film KGF: Chapter 1, Pranathi from Bramhagantu, made the audience emotional with her story. It was about how it is very difficult for a woman to live alone especially when she has lost her mother. Her performance also spoke about how women get objectified despite being innocent.

Unfortunately for Pranathi, she had to perform solo yet again for the third week now but finding hope in the darkest of situations is what humans do best, so this was her opportunity to come up with a story that is women-centric. After a lot of performances, the three judges all stood up for Pranathi’s emotional performance. Since the sensitive topic was explored so well, the judges decided not to give scores for this dance-act too.

From the 1981 film Geetha, the duo of Lokesh and Manthana performed on the song Kelade Nimageega and theirs was a romantic story. Based on the fact that the two lovers are from different places, how they come together at the end is shown in this beautiful performance. With certain aspects of villages in the olden days, the two re-created the magic of 1981 for us in this act. Using the choreographer (Shashi) of the dance in a comedy aspect, the performance got great comments by the three judges (Judges Rakshitha and Vijay gave them a standing ovation) and their final score was 28/30.

8. Hanumantha and Shiny from Sa Re Ga Ma Pa

Bringing the concept of a father-daughter relationship to the audience were Shiny and Hanumantha from the Sa Re Ga Ma Pa fame and boy what a performance it was! Through the song Malage Malage Gubbi Mari from the film Nalla, the duo narrated a story of a loving father who still thinks his deceased daughter is with him. A tribute to all fathers everywhere, Hanumantha and Shiny performance earned them a lot of praise from the judges. Their cumulative scores were 26/30.

Not only this, but Hanumantha got an apartment as promised by the Chairman of Confident Group, right next to the one given to Keerthan Holla. The Chairman also announced that the winning jodi of this season will get 20 Lakh rupees and the choreographer will get a five lakh rupees from Confident Group. Isn’t that awesome?

9. Suraj and Minchu from Comedy Khiladigalu

Playing the roles of a brother and sister for this act, Suraj and Minchu from the Comedy Khiladigalu fame did a heart-winning performance. Their story was about how a brother loses his sister over constant body-shaming. She tries to fall in love but is rejected many times. Finally, due to bullying and other problems related to being overweight, she decides to undergo an operation to become thin but unfortunately loses her life. Suraj and Minchu truly stepped out of their comfort zone of Comedy for this act and got 29/30 for their exceptional story and execution.

10. Ashok and Bhavani from Aathma Bandhana

Selecting a beautiful song like Ninna Snehadinda from Mugulu Nage to portray the promises kept between a loving husband and wife during their marriage were Ashoka and Bhavana. Using the sacred fire of a wedding as their prop, both Ashok and Bhavana who were dressed as a bride and groom performed much better than last week securing 25/30 for their performance.

11. Barkath Ali and Ningi (from Comedy Khiladigalu and Kamali, respectively)

Ningi and Barkath Ali narrated a story of ‘a day in the life of a dwarf’. Ningi and the rest of the crew performed on chirpy songs as dwarfs. While the act was thoroughly entertaining and informative, the duo received some constructive criticism to make their performances better in the future. Their final score was 22.5/30.

In an attempt to portray that a woman can be the light of the house as well as show her wrath as fire herself, anchor Anupama did a solo performance and floored the judges for the concept. Unfortunately, it was announced that Nanditha was not keeping well and was advised complete bed rest for this performance. Further, Nanditha has been advised bed rest for the rest of the season. Her performance was scored 25.5/30.

Dazzling Performace of the day: Pranathi

Jodi of the week: Vivek and Hiranmayi

Next Challenge: This week’s challenge thrown by the judges is called ‘Dance as you wish’. Let’s keep our fingers crossed and hope for the best.