Last week on DKDFW2, most of the contestants received much appreciation from the judges as they paid an ode to Sandalwood's greatest jodis 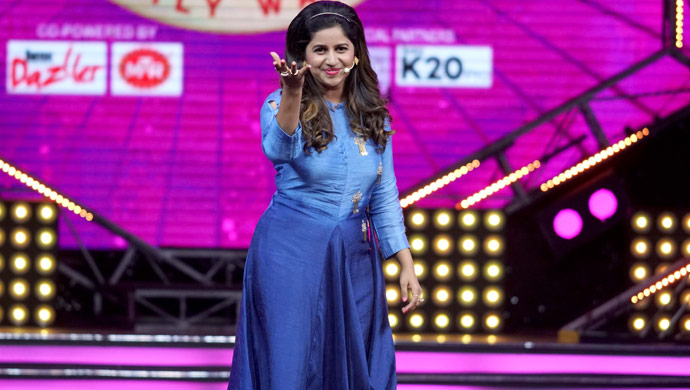 As confirmed by the most beautiful hostess of Zee Kannada, Anushree, namma favourite show Dance Karnataka Dance Family War 2 is the most-watched dance show in the state! For those of you who haven’t watched it yet, it focuses on members from the Zee Kannada Kutumba who compete in pairs for a dance battle. Four weeks into the show, there have been so many exciting moments for fans, who have seen their favourite celebs in a new avatar.

With the fabulous trio of musical composer Arjun Janya, Rebel Queen Rakshitha Prem and Chinnari Mutha Vijay Raghavendra as judges, each episode has been thoroughly entertaining. Last week on the show, it was the ‘Sandalwood Superhit’ round. In this, each participating couple would have to select any superhit song, jodi, movie or even collaboration and perform to impress the audience and judges alike.

So without further ado, let’s see what happened…

The tiny tots of Drama Juniors, Prekshith and Anwisha, danced exceptionally well to a combination of songs for which Mahaguru Nadabramha Hamsalekha and the Crazy Star V Ravichandran collaborated for. The tracks included Yaavudo Ee Bombe, Yaarivalu Yaarivalu amongst others. Their final score was given the ‘Fire-Brand-Performance’ tag followed by the golden hats.

Dancing to the tunes of Raambo 2’s superhit song ‘Chuttu Chuttu’ was Hanumantha and Shiny, who looked adorable on stage together. Take a glimpse of their performance from the clip above. Their cumulative scores for this performance was 26.5/30.

To recreate the jodi of Radhika Pandith and Rocking Star Yash, Pranathi from Bramhagantu, who recently partnered up with Tejas from Kamali, performed beautifully and got immense praises from the judges. Their final scores were 24.5/30.

Considered to be one of the strongest jodis on the show, Preethu and Anika brought back the memories of the Shivanna and director Prem film Jogi. Their excellent short version of the film almost brought tears into the judges’ eyes. For a glimpse of their performance, check the clip above. The act was given a standing ovation by all and the jodi of Preethu-Anika got the ‘Fire-Brand-Performance’ tag and the golden hats.

While this duet was on its way to get full marks, unfortunately, Vicky blacked out owing to his ill-health. However, the silver lining was when judge Rakshitha loved their half act so much that she requested the two to perform the remaining half for the audiences and encouraged them that it happens. They tried to recreate the romance between Kichcha Sudeep and Sandalwood Queen Ramya in their film Just Maath Maathalli. Vicky and Adithi scored 25.5/30 in the end.

Unfortunately, as Lokesh wasn’t keeping well, Manthana had to perform alone. Her performance on Male Bille Male Bille from the film Sainika won great praises from all the three judges. Even the choreographer, Shashi master, was given compliments for making the solo act look so colourful. Her final scores were 25/30.

From the Sahasa Simha’s blockbuster hit of all times Nagarahavu, Soorya and Hiranmayi recreated a short version of the entire film. Their act got them a standing ovation from all the three judges followed by the ‘Fire-Brand-Performance’ tag and the golden hats. Get a glimpse of their act in the video above. The act was a tribute to Dr Vishnuvardhan, who would have celebrated his 69th birthday on 18th September this year.

Using the Superhit jodi of Dr Rajkumar and Manjula Ma’am, the tiny tots of Drama Juniors, Anoop and Dimpanna performed adorably on the song I Love You Jeeva Hoovagide from the film Nee Nanna Gellalare. Their performance was unique as they used almost all of the sets to perform. Finally, they were given a total of 29/30 for their fabulous performance.

Bringing the Shankar Nag-Ilaiyaraaja combination in the form of the film Geetha, the duet performance of Ashok and Bhavani floored the judges. While you can see a glimpse of their performance in the clip above, they got the ‘Fire-Brand-Performance’ tag and the golden hats from the judges too.

Bringing a glimpse of the Real Star Upendra, Suraj and Minchu performed on the song Hoove Hoove from the film H2O. Their efforts were lauded by the judges, who also appreciated the costume designers for doing such a great job. In the end, Suraj-Minchu secured a whopping 28/30.

Without her partner Barkath Ali, Ningi performed solo for the second consecutive week on the Action Queen Malashri song Jataka Kudure Hatti from the film Gajapati Garvabhanga. With constructive criticism from all the three judges, Ningi managed to secure 21/30 for her act.

Smile Performance of the week: Preethu and Anika

Dazzling Performance of the week: Soorya and Hiranmayi

Next week’s challenge: According to judge Vijay Raghavendra, since the choreographers are behind each jodi’s success, this week it will be the ‘Special Choreographer’ round.

Stay tuned for the fun and excitement this weekend.

Watch Dia Mirza And Mohit Raina In The ZEE5 Original Series Kaafir, Available Now In Kannada, On Your ZEE5

Comedy Khiladigalu Season 3 Weekly Recap: Here Are The 3 Contestants In The 'Danger Zone'