On the first week of Dance Karnataka Dance - Family War 2, we saw six jodis participating on behalf of their respective Kutumbas. Click to know more! 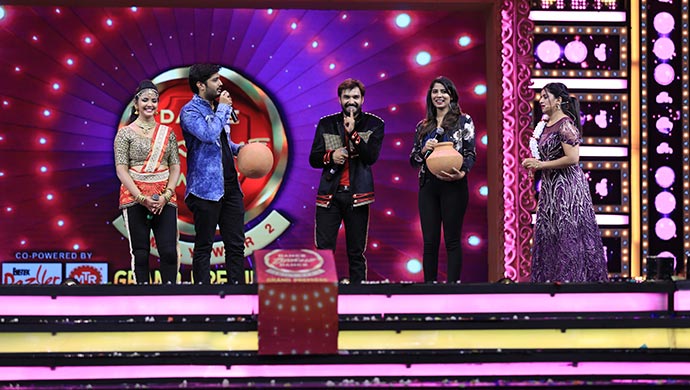 Dance Karnataka Dance – Family War 2 has begun and fans couldn’t be more excited! For the first of the Grand Premiere that took place last weekend, a massive audience welcomed the six jodis by showering their support. From Zee Kannada shows like Mahadevi, Kamali, Paaru, Gattimela, Drama Juniors, Sa Re Ga Ma Pa and Comedy Khiladigalu, all the participants brought in their best for their first performance. Other family members like Rishi, Kamali, Paaru and Aditya, came to support their Kutumba members too. In a gist about the show, DKD Family War 2 is a show in which lead characters from various shows on Zee Kannada, as well as reality shows contestants will participate in a dance battle. Hence the name ‘Family War’.

As always, the cute hostess Anushree connected us fans brilliantly with the judges and participants. Her knack for comedy will most definitely get you ROFLing till the end.  The sakkath judge-trio of Rakshitha Prem, Arjun Janya and Vijay Raghavendra showed their encouragement and support towards all performances with a few standing ovations too. So without further ado, let’s confirm the first six jodis that began the second season of Dance Karnataka Dance – Family War 2 with a mega-blast.

All three judges gave their standing ovation to the tiny tots of this season, Anoop and Dimpanna. But hey, don’t go on their appearances, they are in the true sense ‘Pocket-sized powerhouses’ of #DKDFW2

Take a look at a glimpse of their performance here:

Suraj and Minchu from the Comedy Khiladigalu fame got the second standing ovation from all three judges. Not only for performing brilliantly but also for their immense hard work to give a superhit act.

Check out how they performed here:

3. Vicky and Adithi from Gattimela

The Bhava-Naadni combination got praises and encouragement from the judges to do better in their next performance. Gattimela fans, keep your fingers crossed!

Want to know how they performed? Take a look at this video:

The cute lady villain Anika and Namma Preethu from Paaru did a fantastic job in their performance with a standing ovation from Rakshitha Prem. Hostess Anushree too pointed out that unlike others Preethu was enjoying every bit of the dance he did.

Check out a glimpse of their performance here:

5. Hanumantha and Shiny from Sa Re Ga Ma Pa Season 15

The famous Shepherd boy Hanumantha along with his Sa Re Ga Ma Pa co-contestant Shiny brought down the roof with their attitude, but all three judges asked Hanumantha to work a little bit more on his dance and lip-syncing techniques since he is new to dancing!

Want to see how Hanumanth performed? Click on the clip below:

6. Hiranmayi and Soorya from Mahadevi

For those of you who have watched the first season of DKD – Family War, must know that Namma Soorya from Mahadevi aka Vivek has already participated once before. But as said by Anushree, Vivek is in love with the DKD Kutumba and finds a chance to always come back. Awww!

What say, you and I together we wait for the next set of the list of participants this coming weekend? Don’t forget to let us know which team are you cheering for at the moment in the space given below.

Watch all the episodes of Weekend With Ramesh Season 4, streaming in HD only on your ZEE5.

Sruthi Hariharan And Sathish Ninasam Have Together Done A Fab Job In The Drama Film Beautiful Manasugalu. Click Here To Watch The Film On The ZEE5 Platform

Birthday Spl: 6 Hilarious Movies Of The Comic Icon Chikkanna That You Can Stream On ZEE5