Last week on #DKDFW2, many teams did much better than their last act while others not so much. Did Pranathi find a partner? Click here to know! 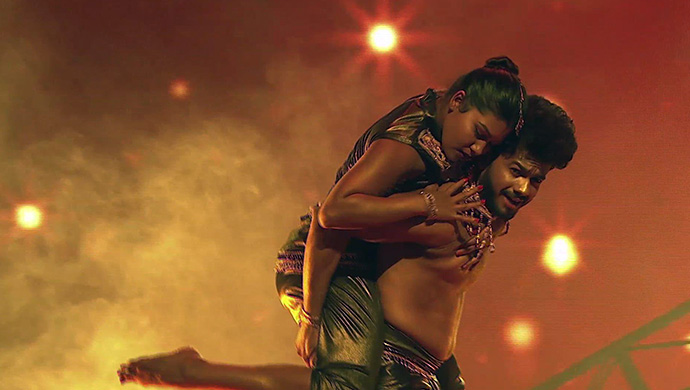 We learnt many things last weekend on Dance Karnataka Dance Family War 2, starting with how the new FaceApp is trending everywhere. Hostess Anushree had a presentation to show with a selected set of contestants and judges, in their younger and older selves. While the results were absolutely hilarious, if you are yet to watch the episodes, don’t miss Rakshitha Prem’s reactions to Anushree’s presentation. With the advent of Week 2 on the show, if you recollect the weekend before last, Vijay Raghavendra gave the 12 participating teams a Duet-Round challenge.

So without further ado, let’s take a look at how the 12 jodis fared shall we?

Both beginners in dancing, Barkath and Ningi’s cute performance was liked by judges, especially for focussing more on the song and the performance together. Unlike their last week’s score, Ningi and Barkath scored 25.5/30, which means improvement is well on way, isn’t it?

Under 10 years of age, the tiny tots of Drama Juniors, Anoop and Dimpanna turned everyone’s heart into mush, with their scintillating love dance. With such precision in their act, a standing ovation was in order. Not only this, the puttanigalus were asked to perform ‘once more’ by popular demand. Second time in a row, they got a ‘Fire Brand Performance’ salute from Vijay Raghavendra and Arjun Janya. This was followed by the ‘Golden Hats’ by Rakshitha Prem.

Without a doubt, this was Suraj and Minchu’s best performance yet. Just like Rakshitha Ma’am said, every week, this jodi of Suraj and Minchu keeps aiming for bigger and better, with a strong dash of humour of course. From the video above, it is evident that despite their physical appearance, for both Suraj and Minchu, dance lifts are as easy as slicing some benne (butter). The end result was a whopping 29/30!

Hanumantha and Shiny from the Sa Re Ga Ma Pa fame, attempted to a dance style called ‘Robotic-Folk’ and boy was it awesome or what? While their performance lacked some sort of finesse (according to the judges), the overall feedback was positive. As compared to the week before last, Hanumantha and Shiny got 23/30, so there’s scope for improvement yet.

According to the judges, although the concept of dancing on a sensual song, both Lokesh and Manthana left their steps incomplete. Additionally, due to the lack of coordination between the background dancers, at many places, the sync went off. However, with positive feedback to perform better, the two scored 23.5/30, from the judges.

From the Drama Juniors family, Prekshith and Anwisha performance on a cute but romantic duet. Expression Queen Rakshitha Prem was later asked to mimic Anwisha’s performance and the result can be seen in the video above. Even though they scored 26/30, their overall feedback was more than positive.

Despite a ligament-tear, Adithi from Gattimela along with her dance-partner Vicky gave a romantic performance last week. So much so that the three judges were shocked to see that Adithi didn’t let that pain show on her face or in her steps. For their wonderful effort and with the encouragement to keep getting better, the judges scored gave the dance-jodi 24/30.

With sakkath josh in their performance, Hiranmayi and Soorya floored the judges and their fellow-participants with their act. Taking the unique concept of an army-wife, for whom, even though her husband is not around, her sindoor is her best friend, until… (watch a glimpse of the performance above to know what happens). Their act was given a score of 28.5/30 which is slightly better than last-to-last week’s score. But as they say ‘progress no matter how small, is important’, we certainly hope these two give a ‘Fire Brand Performance’ next week.

Making the highest progress, i.e from the first week’s 22.5/30 to scoring 25/30 last week, Nanditha and Anupama have shown so much potential. Despite having stitched all over her body, Namma Nanditha from Jodi Hakki danced like nothing was wrong with her. This effort was commended by the judges too. Fingers crossed to see these two working towards full marks.

Since last week’s round was a ‘Duet Round’ Preethu and Anika chose to perform on Vijay Prakash’s Shrungarada Honge Mara from the film Panchatantra. It was a brilliant effort in terms of chemistry from both of the performers. So making slow but steady progress, i.e from 24/30 (in the first week) to 25/30, let’s wait and watch their journey on #DKDFW2.

Unfortunately, Pranathi still didn’t have a partner last week but gave it her best as she performed on a song with lights as the main prop. The coordination and the effort were lauded by all the three judges, who cumulatively gave her a score of 24/30.

Dazzling performance of the week: Vivek and Hiranmayi

Jodi of the week: Anoop and Dimpanna

Performance of the day: Suraj and Minchu

Next challenge: Vijay Raghavendra announced that next week will be the ‘Mass-Round’. This means that all mass-oriented films, songs have to be utilised to bring out the best in each celebrity-jodi.

Give a shout out to your favourite team, in the comments box given below.

Watch Vijay Raghavendra’s hit film Kismat, if you are a fan, here on the ZEE5 platform.

The Rocking Star Yash Has Done Great Work In The Action-Drama Film Rajadhani. To See How This Actor Looked A Few Years Back, Click Here To Watch This Film On ZEE5

Janaki-Nanditha To Geetha-Pinky: Here Are 5 Best And Worst Sisters-In-Law On TV