The team of Ekalavya had a fun time with the judges and contestants of Comedy Khiladigalu. All details inside! 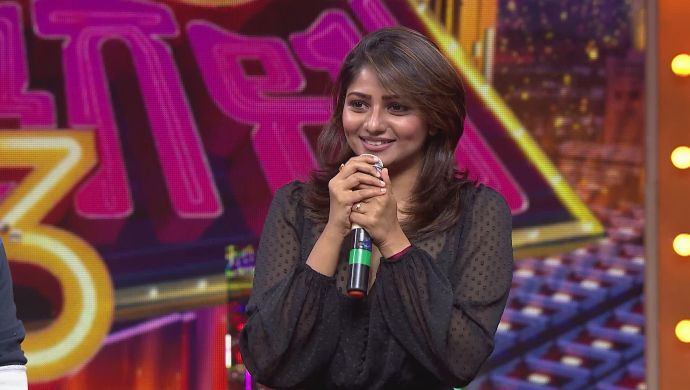 In the previous week of Comedy Khiladigalu, the judges had a gala time during the ‘Maha Milaana’ episode, which saw contestants from season 1, 2 and 3, taking part in season 3 of Comedy Khiladigalu. While the first act was about Manjunath, who donates all his money and comes to terms with life after doing so, another commendable act was on a lesson taught by a wife to her sadist husband and is one that we don’t get to see on stage that often. This act was undoubtedly one of the best, performed by Raghu, Danappa, Divya Anchan and Chandrasekhar.

Master Anand was seen entertaining everyone with his splendid comic timing. Wishing everyone a happy Valentine’s Day, our very favourite host welcomed the guests for the evening.

It’s was a special day indeed, with the whole Ekalavya team making an appearance which included director Prem, along with actor Rana, Rachita Ram, and Reshma.

The first act was about a couple who has ruined their relationship to such an extent during the time of marriage, that they have put their life at stake. Acted out by Rakesh, Manohar, Deepika and Divya Anchan, the audience could not have asked for a better opener.

Another act was about a marriage broker, who gets a couple married but ends up living with them. Acted out by Praveen, Danappa and Umesh, this one is worth a watch!

Rachita Ram also had a few fun moments with the contestants and danced on romantic songs this Valentine’s Day, too! Oh, we just cannot get our eyes off ‘Dimple Queen Rachita Ram’.

Every wife has certain dreams for their husbands and wants the best for them. However, ever heard of a wife who wants to make her husband a rowdy? This one by Deepika, Rakesh, Santosh, and Chandrashekar shouldn’t be missed at all!

Next came a story of a drunkard, who makes his wife and in-laws play games to entertain himself. Watch the act to see what happens after that. Acting as a drunkard was Santosh along with Danappa.