Captain Raam From Hebbuli Or Ram From The Villain, Which Look Of Kiccha Did You Like More?

Namma Kiccha Sudeep believes in accepting a variety of roles. With different roles come different looks. Time to decide which Ram you liked the best? 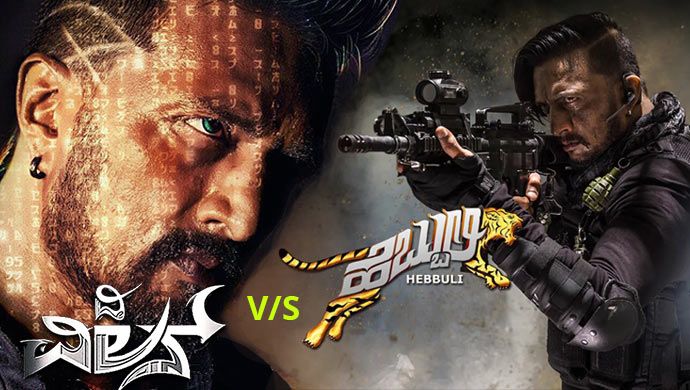 For fans to build reliability with an actor or to make them their idols, it is very important for the star to be of that calibre. That is exactly what Namma Kiccha Sudeep has done since his entry into Sandalwood. Not only has he gained traction with the masses but has also become a megastar in the process. While many of his movies have won him awards, today we will look at the two different looks he displayed in the films Hebbuli (2017) and The Villain (2018).

His character of Captain Ram in Hebbuli was a strong and powerful one in a patriotic sense. Kiccha portrayed a para-commando officer and boy did he nail the look or what. The actor looked Sakkath in his military getup and was even nominated for the Filmfare Awards South for the best actor. Apart from that, he has done many killer action scenes in the movie too. He sported a neatly-shaved para-commando officer with some apt apparel to fit the role. Three cheers for the man who single-handedly brought out an important social message to the public.

In The Villain, Kiccha played the role of Ram, a local but very powerful thug, who eventually settles down in London as The International Don. In this film, Sudeep was seen in two different getups. The first one was that of a local village sporting a kurta-pyjama while the second avatar of his is the well-suited long-haired sunglasses-wearing International Don. This film was made more for the emotional aspect of fans and Sudeep hit the bulls-eye in each scene, don’t you think?

Overall, all three avatars of his were as different as chalk and cheese. But you have to decide which side of this  talented actor you loved.

Let us know in the space given below.

Watch Kiccha’s hit 2008 film Gooli on ZEE5, if you like his rugged looks more.

If You Liked Ram From The Villain, You Will Love Captain Raam In Hebbuli Even More. Click Here To Watch It Now