Find out why Swathi Ma'am never got to distribute chocolates in school during her birthdays and also about her favourite show in this exclusive. 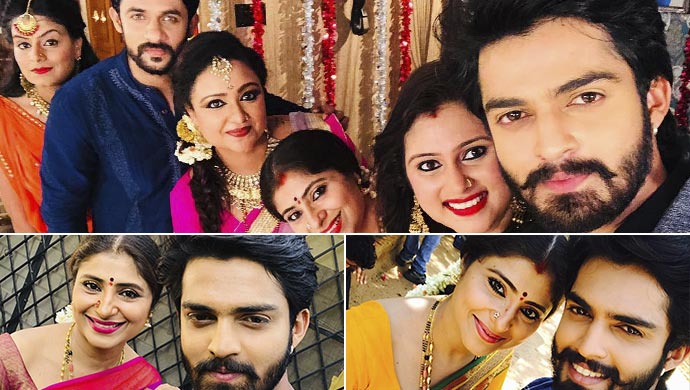 The hit Zee Kannada show Bramhagantu, is a show about an oversized, but larger-than-life girl Geetha, who gets married to Lucky under peculiar circumstances and thus begins their journey of life. Lucky’s mother, Sumathi, loves him more than anything in the world and initially hated the healthy size of Geetha. However, the show took drastic turns and this situation changed. Now, Geetha and Sumathi are almost like best friends. She is a mother to Lucky, a mother-in-law to Geetha and most importantly, a wonderful wife to Narasimha. On her birthday today, it’s time to know a little bit more about the evergreen actress Swathi.

In an exclusive interview with us, Swathi ma’am got revealing about details from her personal life, that we were very eager to know. For example, as compared to Shrirasthu Shubhamasthu, she claimed to always keep the show Bramhagantu close to her heart. Then there were glimpses of her how her mother would take her and her brother to their village during their summer vacations. So let’s get to know this beautiful actress’s personal life, shall we?

Q: Tell us little about your last show Srirashthu Shubhamasthu and how it is different from Bramhagantu?
Swathi Ma’am: Actually, I last acted in 2003 in Sumangali, after which I took around 11 years of a break because I was pregnant with my son and till he was 10 years old I didn’t take up any projects. After that, I had taken up a show on ZEE called Sagara Sangama. That in the real sense was my comeback serial. Only after the show ended, did I then go ahead and take up Shrirasthu Shubhamasthu. In that, the character is of a normal widow, whose husband and son die in an accident. The lady then considers the hero of the show as her son and brings him up. According to me, it was a very simple role, nothing major in terms of performance. Have you heard the phrase ‘gumpnal govinda‘ (someone who fades into the background)? It was like that. But the show that actually gave me immense happiness was Bramhagantu. There I never felt like I am acting or anything because I found a real family there. To be honest, be it Geetha or Lucky or even Bharana Sir, he is such a legend and I got the opportunity to act opposite him. Then, our director Prathap sir, has created a platform where we as artists can learn. Every day when I enter and exit from the sets, there is so much of knowledge I take with me. Even as a human I think I am being better day by day. So for me, all the films and projects I have done, on one side and Bramhagantu on the other side, I will still say that my all-time favourite is Bramhagantu.

Q: Your best birthday memory from your childhood!
Swathi Ma’am: Truth be told, my birthday is on May 17th right, so it’s a vacation time then. Since my school was never open, I never got the opportunity to take chocolates to school, ever (chuckles). When I was a child, I remember my mother would take me and my brother to our native place for the vacations. Since she would also get just one vacation in a year, I would always spend two months of my holidays in my birth-place, Honnavara. So my April-May months were always spent there. And towards my native town, birthdays aren’t given any prominence, like cake-cutting or distributing chocolates. Since I am from Honnavara, there at the max, (chuckles) they would light a tuppa-deepa (Ghee-Lamp) and do aarthi. But the concept of cake-cutting or giving a small party did not exist. It was considered a very simple event. Having said that, I don’t have any special attachment about it being my birthday.

Q: Any recent birthday memory, you would like to share?
Swathi Ma’am: To be honest, I don’t ever celebrate my birthday. Recently, that is from 2014, a close friend of mine from the industry, the heroine of Shrirashthu Shubhamasthu, Shwetha, calls me on the 17th of May, from wherever she is. She makes it a point, she comes and cuts the cake with me and she goes back. This has become like a tradition now. If she is in a shooting, then I will make it a point to go there and meet her for some time. Truth be told, in the entire industry, I am very very close to her, Shwetha. Or else, the family of Bramhagantu like they did last year, plans a small get together involving a cake-cutting ceremony. Another friend of mine, Divya, got a cake cut by me too. The hero of Shrirasthu Shubhamasthu, Naveen, for example, comes to spend some time on my birthday with me. So because of things like these, I almost always cut cakes and celebrate my birthdays with my serial family itself.

Isn’t she just a wonderful lady? I personally adore her, because while she acts brilliantly and looks gorgeous, she is a gem of a human being. While signing off, the Bramhagantu actress expressed her immense gratitude to us for remembering her birthday and taking the time out to get in touch with her. On a lovely ending note, she said, “Thank you so much, you took an initiative and thought about a small artist like me and called up to find out details about me, thank you so much. Really, you people consider me also and that brings me great happiness, thank you once again.”

Send in your love to this adorable actress and wish her today, in the space given below.

Watch Swathi Ma’am in Shrirasthu Shubhamasthu, streaming for free on the ZEE5 platform.

Gattimela 16 May 2019 Written Update Of Full Episode: Vedanth Hitches A Ride From Amulya

Craving For A Burger Like The Cutie Amulya Gowda? These 5 Joints Will Satisfy Your Hunger