Birthday Spl: 5 Reasons Why Ravikumar Aka Manjunath From Gattimela Is The Best Dad Ever!

Here's a treat from us to Ravikumar, aka Manjunath of Gattimela, on his birthday today for being the best dad on the entire Zee Kannada roster. 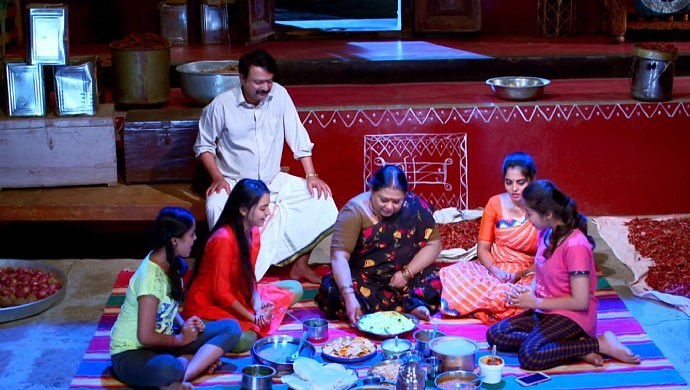 From the inception of the superhit show Gattimela, the head of the Manjunath family, aka Mr Manjunath himself, has been the rock-solid support to his lovely wife Parimala (played Sudha Narasimharaju) and his four daughters; Aarthi, Amulya, Adithi and Anjali. In real life too, Manjunath aka is Ravikumar is a great actor, fond of his onscreen daughters. Go to each of their social media pages and you’ll find a couple of pics with him. The show Gattimela, itself has progressed really well thanks to actors like Ravikumar and Sudha Narasimharaju, who although are supporting actors but glue the serial well.

On Ravikumar’s birthday today, we would like to point out five awesome reasons why he will make the best dad of the year on the entire Zee Kannada roster. Keep scrolling…

1. Manjunath has always worked hard to keep the ladies of the house happy

What I mean by this is that since the beginning, when it was established that he was a bus-conductor, we would always see him go in the morning and return late at night. For his daughters, his hard work is a good example to inculcate in their own life.

2. He doesn’t find any difference between a son and Amulya

This is something still many fathers don’t do, but for Manjunath, he considers Amulya like the son of the house. It is very important at this age for a father to be unbiased with his children. Be like Manjunath and encourage your daughters to go out and work and become independent.

3. Manjunath is a forgiver

A very important quality for a parent to have, especially a father. During the episode when Amulya slapped Suhasini for slapping Parimala, instead of screaming at her, Manjunath was so proud that in his absence, his daughter stood up for their mother. He forgave her immediately. While it is important to know the difference between the right and the wrong, it is also important to stand up to injustice.

4. He is far from sharing his troubles with his girls

Amulya, Aarthi, Adithi and Anjali have never heard about any of Manjunath’s problems till date. Of course, Amulya keeps probing and finding out matters that’s a different thing, but he himself has never shared any problems with his children in the hope to not trouble them with his burdens. A+ to the man for this quality!

5. Manjunath is a loving husband

A good relationship between the parents is very important for children to see from and learn. It helps them build a better future for themselves in their mind. Therefore, Manjunath undying love for his ‘Pari’ is something you too can take inspiration from.

Give this great actor a shout out on his birthday today, in the comments box given below.

Watch the hit film Doddmane Hudga, streaming on your ZEE5 for more entertainment.

If You Like Films That Focus Completely On Family With Elements Of Action, Drama And Romance, Don't Miss Watching Thayige Thakka Maga, This Weekend Only On ZEE5