Director Kumaar was looking out for actors like Chandan Achar and Tabla Nani to make the film more realistic in nature. Keep reading to find out more. 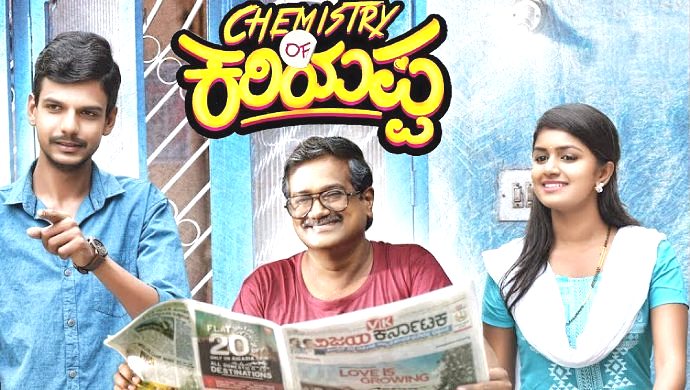 Chemistry of Kariyappa is probably one of the most unique films this year that will be launched on ZEE5 tomorrow. Directed by Kumaar, the film has Chandan Achar from the Mugulu Nage fame as the protagonist followed by Tabla Nani as his father. The female protagonist is played by Sanjana.

A cool fact is that the director has also done the story and screenplay of the film. In an interview with a leading media firm, the director opened up about a few interesting facets of what his mind frame was while generating this concept. Kumaar first confirmed that it is a comedy film, by saying, “The film will be humorous and is loaded with situational comedy. I believe people come to theatres to watch a film that makes them forget their problems and enjoy the few hours with the characters on screen. Hence, we came up with Chemistry of Kariyappa, which will make you laugh out loud.”

After confirming that the film will look at the delicate relationship between a father and a son, the director revealed why he chose such a cast. “I chose these actors as I wanted the film to have a very realistic look. Tabla Nani is known for his timing in humour. In fact, I wrote the script keeping him and Apoorva in mind. Later on, I brought in Chandan to play the lead as I felt he suited the character. He even has the body language that goes perfectly with the character he portrays,” he said.

He further added, “The story is picturised in such a manner that anyone can relate to the characters. In fact, the story is based on a true life incident that happened in Mandya four years ago. That inspired me to make Chemistry of Kariyappa.”

While Chandan Achar has played a supportive role in many films, it will be a treat to watch him makes his impressive debut as the lead. Also, the chemistry we speak of in the film has nothing to do with the subject ‘Chemistry’ but has to do more with equation between a father and a son along with the son and his wife.

Are you looking forward to watching the film? Let us know your thoughts in the comments box given below.

You can now stream various films on ZEE5 to keep the entertainment going.

Before The Raghavendra Rajkumar Special Airs, Watch The Padma Bhushan Veerendra Heggade Special On Weekend With Ramesh, Streaming On ZEE5

Did You Know Ankietha Loves The Colour Red? These 7 Outfits Will Prove It