At Such A Young Age, He’s Achieved So Much: Gattimela’s Amulya On Her Celeb-Crush Yash

Nisha also spoke to us about her three best friends on the show and about her relationship status in this EXCLUSIVE interview. Read on for more! 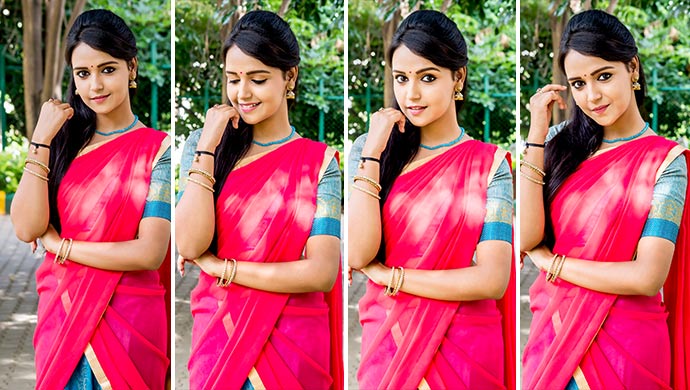 Gattimela is the story of two starkly-contrasting characters, Amulya Manjunath and Vedanth Vashishta, who belong to two different classes of society. The killer fights between the two of them, their ROFL scenes are definitely worth every minute of your time. Don’t forget, their ‘romantic’ moments are guaranteed jaw-droppers. Starring as Amulya Manjunath is Nisha Ravikrishnan along with Rakshit, who plays the role of Vedanth Vashishta. These two characters have not only made a place in the hearts of huge masses but are also the best entertainers onscreen together.

We recently had conducted an EXCLUSIVE interview with Amulya Manjunath a.k.a. Nisha Ravikrishnan where we asked about her opinion on a few things. Her chemistry with Vedanth, the difference between her onscreen and real-life persona and a special message for fans, among others. Today, we curated the rest of the interview for you. Here, she speaks about her relationship status, her celebrity crush, her best friends in Gattimela and much more.

Q. Who are your best friends on the show?

A. On Gattimela, most of my scenes are generally at home or in the office. So whoever is on the set during these times is very close to me. But if I have to call someone my best friend from the show, it would be Ashwini Akka (Aarthi Akka), Adithi and Sudha Amma. Out of these three, Priya (Adithi) and I are like really close. Even though Aarthi Akka is my best friend only, but she is more like an elderly sister figure. And since I don’t have any sisters, this serial has given me a chance to get an amazing set of Akka-thangiru.

Q. Fans want to know if you are single? If so, who is your celebrity crush?
A. Yes, I am single (blushes). I have a celeb crush on Yash (Rocking Star), because of his hard work and the brilliant attitude and body language he has on-screen. Actually, both on-screen and off it, the actor is flawless. He has himself come from a humble background. I had seen his story on Weekend With Ramesh and felt that he is the perfect actor who is like an idol for the youth and freshers in the industry. He has also helped and advised a lot of the budding actors. I loved all these about him. Moreover, at such a young age, he has achieved so much. While I like all actors, these are a few things about Yash that I absolutely loved.

Q. From an anchor on Chintu TV to acting on mainstream TV, how was your journey?
A. Honestly, I had never thought that I would act on TV or would be interested in doing daily soaps. I am mainly a dancer and a singer, so I had done a lot of stage shows and studies in both these fields from a very young age. When I started working in Chintu TV, I still continued with my stage shows. While I started inching towards acting, it was because I would get to see myself on TV. Soon afterwards, I felt the need to get into TV or films. That’s how I got into acting. Maybe if I hadn’t become an actor, although I am still studying, I would have continued with my stage shows and studies on a more deeper level.

Q. What are your other hobbies?
A. So I am basically a classical singer and a Bharatanatyam and Western dancer. After joining Gattimela, I haven’t been able to give much time to the classes. I had started my training in the second standard for both Western and Bharatanatyam styles of dancing, whereas my singing training began much more earlier in pre-KG. Apart from dedicating most of my time in these two activities, I also like to watch TV and movies.

Do you have any more questions for this cute lass? Type in whatever you want to ask Nisha in the comments box given below.

Watch Panchatantra, in HD, only on the ZEE5 platform, if you are a fan of Yogaraj Bhat films.

Premier Padmini Movie Review: Jaggesh-Pramod-Vivek Prove To Be The Stars Of The…

Do Horror-Comedies Interest You? If Your Answer Is Yes, Take Up The Challenge Of Watching Appu Sir's Natasaarvabhowma Alone At Night, Streaming Only On ZEE5

Barot House Review: The ZEE5 Original Movie Is One Of Amit Sadh's Finest Piece Of Work Yet