Anushka Vs Parvathi: Who Suits Aditya Best? It’s Time To VOTE For Your Fave Couple

While one is fiercely ambitious and materialistic, the other likes to lead a simple life. Who do you think is the ideal partner for Adi? 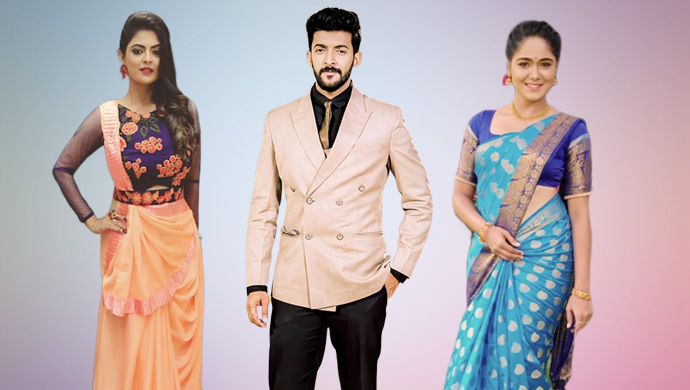 Mokshitha Pai plays the popular role of Parvathi on the No 1 show in Karnataka, Paaru. She portrays the on-screen character of an innocent village girl, who is humble and respectful towards elders. Carrying no negativity inside of her whatsoever, Paaru believes in family values and traditional rituals. For a newbie (first show as the lead), the young lady has continuously won hearts at a rapid pace! If you are a fan of the show, you must have seen Akhila trying to fix Aditya’s marriage a few months ago.

And who does Arasane Koteya Akhilandeshwari find in the process? Villain No. 2 (after Damini) on the show, Anushka, a young and self-made business-woman. Needless to say, Anushka is head-over-heels in love with Aditya from the moment she lay eyes on him and decides that Akhila’s wealth coupled with her son’s affection will make her extremely powerful. However, somewhere she is wrong. Here comes the second angle to this story.

Aditya Arasanakote is a successful businessman sure, but what he craves most is a simple life. Harish, one of his workers, makes a logo for his herbal product company and unknowingly uses Paaru’s eyes as part of it. For Adi, since the day he has seen those eyes he has fallen madly in love with whoever the lady in the photo is. In our opinion, this is the first sign that Aditya and Paaru are meant to be together.

The next sign was when fate made Aditya and Paaru, who assumed that they were having a dummy wedding, actually got married for real. For Anushka though, Paaru is the biggest threat in her life and she has made multiple attempts to eliminate her nemesis from the Arasanekote family working alongside Damini. Another reason why Anushka doesn’t seem to be a good fit is that Aditya genuinely doesn’t like her way of life.

He doesn’t appreciate anyone who causes trouble to others (exactly like how Paaru is) and Anushka is filled with evil. So during the photoshoot where Paaru was forced to wear short clothes by Anushka, Aditya was there to save her. Even when Anushka’s friend tried to eve tease Paaru on the former’s birthday party, Adi was the one to save the day.

The final and sure-shot reason why Paaru-Adi is the ideal couple is that on the inspection trip to the former’s village, they both got drunk and expressed their true feelings to each other (nothing but pure love).

Let us know who is your favourite couple and why in the comments space provided below.

If You Are A Fan Of Vinaya Prasad Aka Akhilandeshwari, Watch The Film Rajaratha To See Her In A Cameo Role, Streaming Here On ZEE5