Anti-Terrorism Day Spl: An Honest Look At Madras Cafe Vs Cyanide Vs The Real Assassination

Cyanide or Madras Cafe? Which film will you watch this Anti-Terrorism Day? It's a chance to learn about Rajiv Gandhi's assassination, so choose wisely 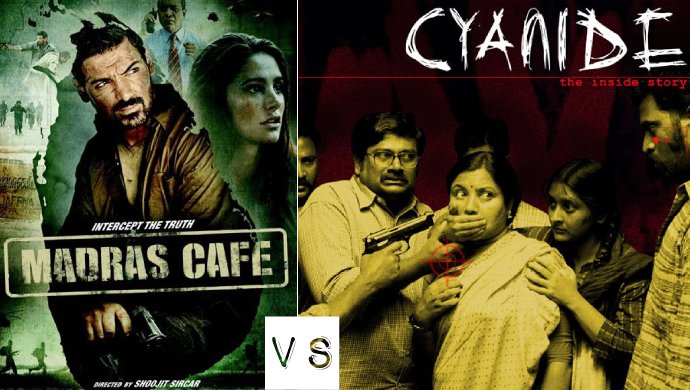 In the memory of the former Prime Minister of India, Rajiv Gandhi, 21st May is observed as Anti-Terrorism Day every year. Serving as the 6th and the youngest PM of India (then aged 40), Rajiv Gandhi was assassinated in Sriperumbudur, Tamil Nadu on 21 May 1991, while campaigning for the elections. The cause of his death was a woman named Thenmozhi Rajaratnam, who blasted off approximately 700g of RDX explosives that she hid in her dress, making her the first ever human bomb, in the country. This act was deemed as terrorism later on by various sources.

Soon after the Ex-PM’s assassination, 7 suspects were apprehended by the SIT (Special Investigation Team) of Tamil Nadu and sentenced to life imprisonment. However, according to recent reports from various external sources, the Tamil Nadu CM has approached the State Governor to release these convicts, who have served nearly three decades in prison.

The objective of Anti-terrorism day is to spread global messages of world peace and non-violence. It also commemorates the sacrifices done by millions of soldiers who laid down their lives to fight terrorism. Apart from these two, it looks at paying a tribute to the families of those martyrs. For prevent such instances from happening in the future, the day is meant to construct programs and increase awareness in the future generations from any reformist influence.

A lot of attempts have been made in many film industries of India to take inspiration from that incident but the two best attempts were made in the Bollywood film Madras Cafe and the Sandalwood film Cyanide. Today, we will take a look at how these two films were actually different from the real assassination.

Madras Cafe:
As claimed by director Shoojit Sircar during a press conference at the time of the release of Madras Cafe, the film has few similarities to how the incident took place but has retained the main subject of the assassination, as it was a public record. With big names like John Abraham, Prakash Belawadi and Nargis Fakhri in the mix, the film initially received a lot of criticisms my many sects in the society. Soon, the noise subsided and the film won 11 awards in different categories including best direction and the best action. The director touched this delicate subject but handled it really well on screen. Not giving away too much information to get mixed up in many controversies, the film looks at a memoir of an ex-RAW agent and how he couldn’t stop the assassination of the Ex-PM, even though there were signs everywhere, that could have saved a great leader.

This spy political thriller talks about a spy who is sent on a secret mission to Sri Lanka. Once there, he uncovers some national-threat information that leaves him flabbergasted. The crux of the story is when he learns of a possible assassination attempt that is being planned for the national leader and how he takes a step to try and prevent it.

While the story is ideally based on the heinous act committed on Rajiv Gandhi 28 years ago, there are many differences and similarities here. For example, the movie shows aptly how the former PM was assassinated by a human bomb from a terrorist organisation that traced its roots back to Sri Lanka. Apart from this, the makers have used the real place names like Jaffna and Point Pedro, where these militant groups were based out of. To an extent, the film also portrays the tensions that were brewing in Sri Lanka and India at that time with such political unrest. Many leaders who cared about this assassination attempt and tried to stop it, have been recreated in the film.

Talking about the differences, John Abraham’s role was a fictional character made for the film. One of the other differences in the movie was the name change of the LTTE organisation to LTS- Liberation of Tamils Front.

Prakash Belawadi, who has done a fabulous job in the film, as the mole in the system, spoke about his experience on working with such a delicate subject and you will be interested to know what he said, in an Exclusive interview with us. “I would say, ‘Madras Café’, in a way, marks the coming of age for Bollywood in dealing with India’s contemporary political reality. It marks a departure from escapism and a hard reckoning with the history we saw in our times. Such topics are always fraught, even more so than contested histories of ancient or medieval times, or even a century ago. We now see many more such films, like ‘Tashkent Files’ right now, ” the actor said.

Shot an extremely realistic manner, is Cyanide, a Kannada film that focuses on the assassins of former Prime Minister Rajiv Gandhi. Apparently, the real incident was actually when the NSG commandos stormed into a building claiming that the mastermind behind Mr Gandhi’s assassination as well as eight other Tigers had made it their hideout. However, when they realised that they were cornered, all the convicts consumed cyanide and died on the spot, before getting caught.

Starring Ravi Kale and Rangayana Raghu, the film is almost like the real story, for the most part of the 150-minute film. While this incident is what took place after the unfortunate assassination of Rajiv Gandhi, the convicts didn’t commit suicide, they were captured and are to this day serving their life-imprisonment sentence, nearly three decades after the incident.

Which film did you like better? Let us know your comments and reviews in the space given below.

To choose from a wide range of your favourite Kannada films, click here to go to the ZEE5 platform now.

East Or West Appu Sir Is The Best! Catch The Trailer Of His Latest Film Natasaarvabhowma, On The ZEE5 Platform, Before It's World Digital Premiere On 24th May 2019.

Gattimela 21 May 2019 Preview: Parimala Knows Exactly How To Fish Out The Truth From Ammu