Annapoorna Reveals Her Mommagalu To Her Entire Family. EXCLUSIVE Kamali Pics Inside

Anika, Kamini and Urmila’s reaction is totally worth the watch on today's episode on Kamali. Presenting to you Annapoorna’s hiriya Mommagalu! 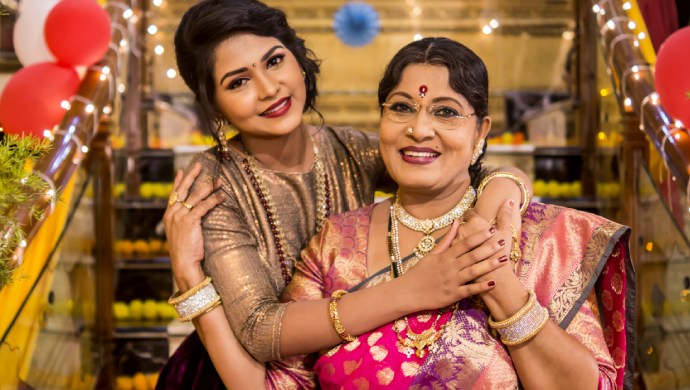 Even though we may have lost all hope that Annapoorna Mahajan from the prominent show Kamali, would ever find her granddaughter, she never gave up. And the seeds of her patience, have now taken fruition. On the occasion of Kamali’s birthday, Annapoorna makes an announcement that astonished everyone present in her home, especially, Anika, Kamini and Urmila.

It turns out that, her hiriya mommagalu is none other than Kamali herself! Annapoorna Ajji proudly brings a revamped Kamali and introduces her to everyone as Kamali Mahajan, her older granddaughter. When I say revamped, look at her hairstyle and all-new attire, isn’t that so cool?

Urmila, Kamini and Anika obviously cannot digest the fact that all of Annapoorna’s property will go to ‘kesrin Kamali’! This came right after their many attempts to ensure that her Annapoorna’s massive wealth goes to Anika only.

Even though the three ladies pretended to kill off a fake Gauri and a fake daughter, Annapoorna Mahajan is one step ahead of them or so it seems. On Kamali’s birthday today, there is more than one surprise awaiting you, so don’t miss even a single episode from here on!

Let us know what you think Anika, Kamini and Urmila will do now that their worst nightmare has come true, in the box given below.

Are you a fan of the hit show Gattimela? Watch the latest episodes only on the ZEE5 platform.

Puneeth Rajkumar's Latest Natasaarvabhowma Will Keep You At The Edge Of Your Seat Till The Last Minute. Don't Miss Watching It On The ZEE5 Platform