Akhilandeshwari’s Life Is In Danger, Will Paaru Be Able To Stop Makrand And Save Her?

A man named Makrand has entered Akhila’s home with the intention to kill her. Will he succeed? Luckily for him, he has befriended a mole in the house 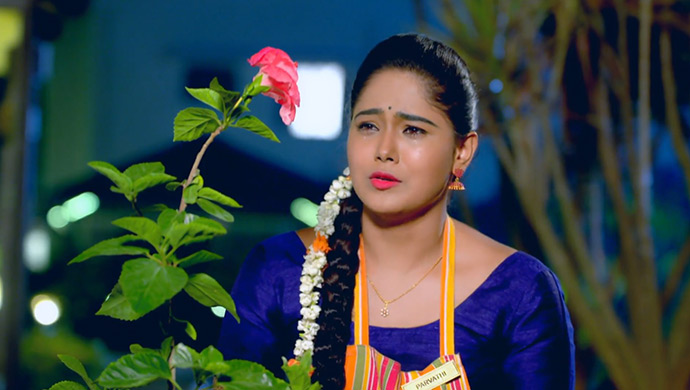 Towards the end of their outing, Paaru and Aditya come across a helpless father, who pleads with his embarrassed daughter to come home and see her Ill mother. Her arrogance is clearly evident to Paaru and Aditya, who feel extremely bad for the crying father. Despite him falling to her feet, the daughter walks away as if she is ashamed to be seen with him. Paaru goes with Aditya to that man’s house and pretends to be their daughter, to give the blind and terminally ill mother some moments of joy. Aditya soon pitches in as the husband of the daughter. The man soon thanks both of them and they leave.

Meanwhile, Damini finds out through Preethu that Aditya and Paaru are together and makes a new plan to oust the ‘kelsadoulu’ in front of Akhila, who is by now on her way back. While Damini makes many attempts to tell her sister-in-law about Adi and Paaru’s little trip, something or the other prevents it from happening. Finally, when Akhila returns, Damini takes her to Aditya’s room to prove to her that he is not at home, but is in for a shock instead. That night, an unknown lady with an ‘A’ bracelet hands over money to a contract killer and gives him Akhila’s photo.

His plan begins the next day, as he enters the lives of Akhila and her family after saving her from a ghastly attack, during a meeting with some people from the orphanage. Impressed by him, Akhila hires him as her personal bodyguard, much to his relief. Paaru, however, keeps a close eye on him and realises that he is not what he seems. On multiple occasions, she tries to warn Aditya and Preethu, but the man, named Makrand, avoids getting caught on all occasions.

When Paaru confronts him later, he admits to everything she accuses him off and asks her to try and stop him. By this time, Damini and Uma figure who Makrand really is and partner with him to finish Akhila once and for all. In the end, Paaru and Gani set a foolproof trap for Makrand in order to save Akhila and expose him.

Will Parvathi and her brother succeed? Let’s keep our fingers crossed.

Watch the latest episodes of the hit show Subbalakshmi Samsara, streaming for free on ZEE5.

If You Are A Fan Of The Young Rebel Star Ambareesh, Then Watch The Past Weekend’s Episode Of Sa Re Ga Ma Pa Li’l Champs Season 16 Without Fail, By Clicking Here