Aditya And Paaru Are Married For Real And Are Now On A Major Guilt Trip. Your Thoughts?

Paaru and Aditya's guilt trip will make you emotional because they are both not able to reveal the truth to the lady they respect the most, Akhila. 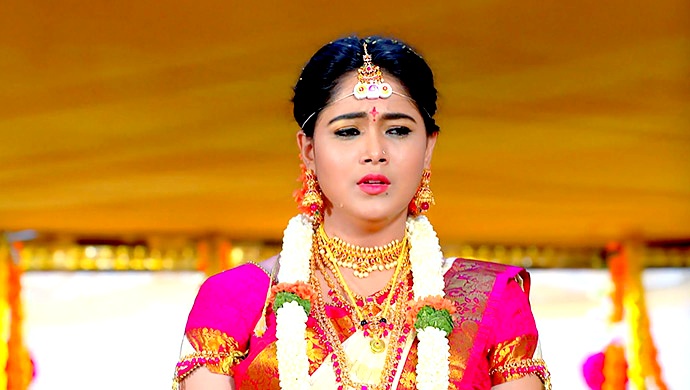 Now that Paaru and Aditya are literally married for real; Adi used a real taali around Paaru’s neck and unknowingly made three knots as is done in a real marriage, it’s time to see how each of them is taking this news. While Adi still doesn’t know that the marriage isn’t a fake, his conscience isn’t permitting him to stay calm as he has disobeyed Akhila, his mother, for the first time ever. On the other hand, Paaru has already started on the guilt trip or treachery against her god, her Akhila Amma.

Apart from this let’s take a look at what else happened since the marriage shall we?

1. Parvathi is devastated when she learns that the Taali was real

2. Akhila finds something fishy when she asks Adi about his experience during the shoot and he responds wearily

3. At her home, Paaru recollects what the priest said about the wedding

4. Just as she is about to throw it away, Hanumanth arrives there and explains the meaning of marriage to her. As a result, Paaru decides to keep the Taali

5. Elsewhere, Akhila seems very disturbed as Raghu tries to find out what is troubling her

6. In his room, Adi speaks the ‘logo eyes’ he has fallen in love with, about how he really feels

7. Out of penance, Paaru gives a leg massage to a restless Akhila, while she is trying to sleep

8. Paaru gets frustrated about her secret and tries to speak to Adi, but finds him too disturbed in his sleep. So she vents out her frustration to the Dasavala Hoova she planted

9. She doesn’t realise that Preethu saw everything

10. The next day, Preethu makes many efforts to convince Adi to stay quiet about their secret until Paaru gets married, and thankfully is victorious

11. Soon, a marriage broker is called home and takes permission from Akhila to show some prospects for Aditya

12. Akhila gets furious when the broker shows a prospect she likes and then puts forth the to-be bride’s condition

13. The next image of the prospective bride causes Akhila to slap the broker

14. After she kicks the broker out of the house, Adi realises that he tied not one but three knots to the Taali around Paaru’s neck.

15. When Disha tries to do something nice for Preethu, he gives her poison instead as she insists that she will do anything to prove that she loves him. Turns out it was a test!

16. Damini scares Paaru into thinking about what will happen when Akhila finds out about her and Adi

17. While Disha loves the engagement invite that Akhila got done for her, she gives the latter a shocking news

What will the shocking news be? Will Disha tell Akhila about what Preethu made her do? Who will tell Akhila the truth first? Paaru or Adi? Stay tuned to find out.

For more entertainment, watch the latest episodes of Gattimela, streaming for free on ZEE5.

With The Eliminations Round, The Puttanigalus On Sa Re Ga Ma Pa Lil Champs Season 16 Will Now Have To Buck Up Twice As Harder. Tune Into The Latest Episode On ZEE5

Jodi Hakki 17-24 April 2019 Roundup: Kadambari And Nanditha's Plan For Rama Is A Hit