Jaggesh was welcomed to the show where he shared a few light moments with the judges and audience. All details inside! 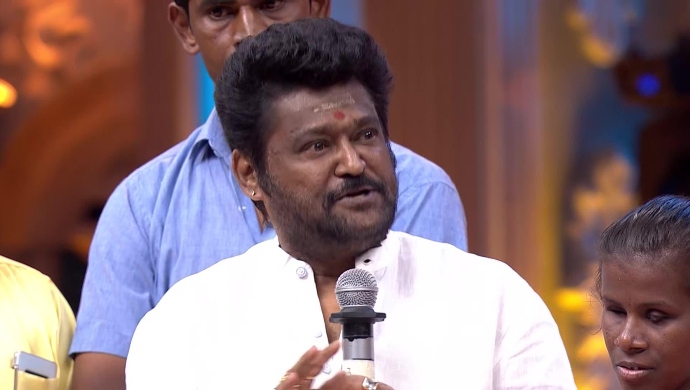 In the previous episode of Sa Re Ga Ma Pa, Ratnamma and Manjamma set the stage on fire while singing Araluva Hoovugale from the film My Autograph while Govardhan thaatha enthralled everyone with a track from Bahadurr Gandu.

This week, Anushree was back and looked dazzling in red! The beautiful hostess welcomed the judges, the audience, and all the contestants of Sa Re Ga Ma Pa Season 17 with her bright demeanour.

The three judges were back and all set for the next set of performances.

Surekha talked about her 35-year journey of singing in the Sandalwood industry while sharing the recent recognition she has also gotten for being part of the Zee family.

Entering with a bang, this performance by the perfect duo—Kiran Patil and Sharadi Patil—was spectacular as they sang  Nodivalanda starring Kiccha Sudeep from The Villain. This act was much appreciated by Vijay Prakash and Hamsalekha. They also had a fun moment with Sharadi playfully beating up Kiran!

The powerful duo of Ratnammma and Manjamma sang Suntaragali from Kalasipalya. This performance really got Rajesh Krishnan in the groove, who came up on stage and performed the song with this duo too!

This episode was indeed a special one as Jaggesh, judge of Comedy Khiladigalu Season 3 was welcomed. The actor spoke of his time in the industry while sharing many fun, light moments with the judges and contestants.

Darshan and Vishwatha Bhat teamed up to sing one of the most trending songs of our time –Sundari from the movie Hebbuli. Originally sung by Vijay Prakash, we can tell that the judge was highly impressed with this performance, especially by Darshan’s rap in between the song.

The last performance was by Srinidhi and Asha, who wrapped up this show with a 90’s number—Preethi Madu Thappenilla. However, the judges did not think of this performance as one of the better ones this week.

Birthday Special: 3 Films Of Actor Jaggesh On ZEE5 That You Must Watch Today