While Vedanth-Amulya have upped the game in acting and relatability, check out these supporting characters who have done extraordinarily well too! 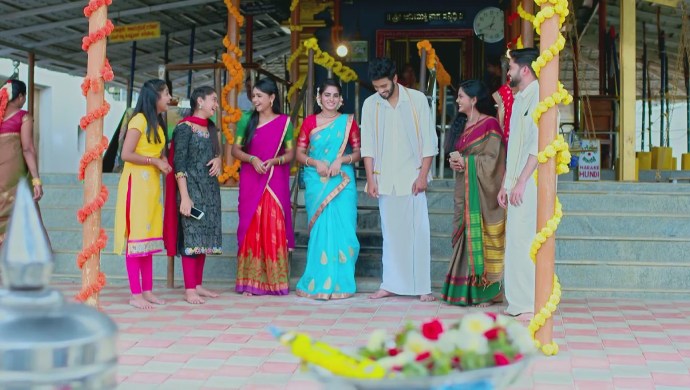 For any show to have a good viewership amongst the public, it is important to have a vision that encompasses every single aspect of the story. From the right balance of emotions to romantic scenes and making the characters more relatable, it is important for every primetime show to keep these parameters in mind. Zee Kannada’s Gattimela boasts of a well-balanced and interesting  concept. It’s a romantic tale of two individuals who are the arch-nemesis of each other.

While the hero, Vedanth is a successful businessman who can’t stand the sight or touch of women, the heroine, Amulya hails from a lower-middle-class family but lives larger than life. But would it be right if we say that the show is entirely run by Vedanth and Amulya? Nope, it wouldn’t because of the exceptional supporting cast that the makers of the show have got on board.

Yes, to a major extent Vedanth-Amulya’s chemistry and acting skills have struck a chord with us but here are the other hidden gems of the show that bring in a lot of value and meaty scenes for us to enjoy.

Arishina shasthra🍂 I love this episode 😍

Meet Ashwini, the actress who plays the role of Aarthi Manjunath, a quite, reserved girl, on Gattimela. However, in real life, she is the opposite of her onscreen character. On the show, she plays the eldest daughter of Parimala and Manjunath. Aarthi is a very obedient child who rarely goes against her parents. However, when she falls in love with Vicky, Aarthi is heart-broken to hide this fact from her parents. A fabulous actor, Ashwini is certainly doing justice to her character, don’t you think?

One of the antagonists on the show, Sarika Ashwath is an evil character in Gattimela and gives us fans many gripping moments. Her personality is that of a conniving person, who can seldom keep her thoughts hidden. Like for example, she has always been clear about how she feels for Amulya and vice-versa. Actress Rashmitha Changappa has hit the bullseye with this character if you ask me because whenever Sarika is around, be rest assured trouble isn’t far away for the Manjunaths (whom she hates from the bottom of her heart).

Adithi is a playful chirpy character. She is the third sister in the family after Aarthi and Amulya. According to her colleagues, in real life too Priya J Achar is the same as her onscreen character. A bubbly girl, hats off to Priya for handling her studies, the Gattimela shoots and now DKDFW2 practise sessions with such grace. Her hard work can be seen on the show so it is needless to say that Priya’s contributions as Adithi Manjunath have helped balance the rest of the serious characters.

Abhishek Das, who plays the prominent role of Vikranth Vashishta, is the next cutie on the show after the hunk Vedanth Vashishta aka Rakshit. Unlike his onscreen character, Abhishek is a much more quiet person in real life but never lets that come in the way delivering a scene fabulously as Vikranth. Why Vicky’s character is interesting and adds value to the show is because he has fallen in love with a woman (Aarthi Manjunath) who is quite older to him. Since such relationships are still considered controversial in the Indian society, it is interesting to see how Gattimela is portraying it in a sensitive way.

Playing the role of the youngest Vashishta sibling Aadya is the actress Anvitha Sagar. The actress has floored everyone with her natural acting. Whenever you watch her notice that all her dialogues come out effortlessly be it with Sarthak, or with her annas Vedanth-Vikranth or even her sisters-in-law Aarthi, Amulya, Adithi and Anju. Unlike their mother Suhasini, none of the three children including Aadya have that attitude that they belong to the upper class of society. It also gives out a positive message to viewers too that even though elder people are set in their ways, we youngsters have the capability for change.

Girish Bettappa plays the role of Sarthak, Aadya’s husband, who is known for his down-to-earth nature. Despite having his own sister Sarika, Sarthak has always been keen to spend time and be with his aunt’s daughters – Aarthi, Amulya, Adithi and Anju. This is because he is also a good character who supports what is right. Newbie Girish has set the tempo right and proven to be an admirable brother and husband on the show.

Parimala Manjunath aka Sudha Narasimha Raju is the only actor in the entire Gattimela roster who is quite experienced in the industry. The daughter of the ‘Hasya Chakravarthy of Sandalwood’ Narasimha Raju, Sudha’s meaty role in Gattimela is that of a housewife, who has her own home-catering business. Despite having financial issues, Parimala has never allowed her daughters to go out of line and keeps them grounded with her love and affection. This, Sudha’s character too, is a force to be reckoned with.

Let us know about your favourite supporting character on Gattimela, in the comments box given below.

Follow all your other favourite primetime shows, here on ZEE5.

Craving For A Burger Like The Cutie Amulya Gowda? These 5 Joints Will Satisfy…

If You Are A Fan Of The Deepika Das And Dheekshith Shetty Starrer Naagini, Click Here On ZEE5 To Watch The Latest Episodes Anytime, Anywhere!