From sending pocket money to his friends to proposing to Sudha Kulkarni, the Narayana Murthy episode on Weekend With Ramesh 4 was awe-inspiring! 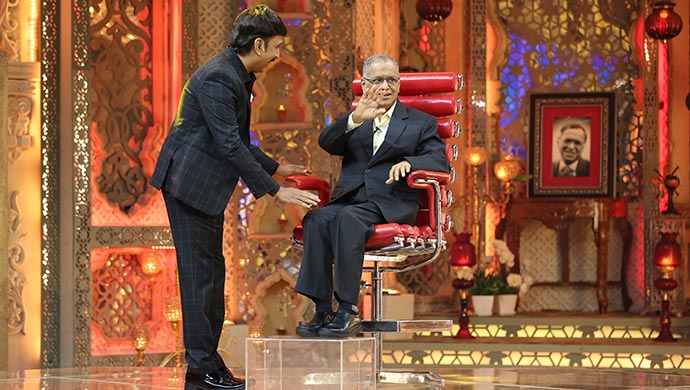 The co-founders of Infosys, Narayana Murthy and his lovely wife Sudha Murthy, made up for an entertaining and informative weekend. The much-anticipated hype about the two esteemed guests gracing the show with their presence was justified when the Murthys opened up about their life journey on Weekend With Ramesh Season 4. Today, however, we will look at some interesting things about the personal life of the multi-million company co-founder and the award recipient of both the Padma Shri and the Padma Bhushan honours’, Mr Narayana Murthy.

Without any further delay, let’s get straight to 8 such facts or incidents in his life, that you may have seldom heard of.

1. A pact with his school mates

While in school, Mr Murthy and his group of friends made a pact that stated that whoever gets a job first will send pocket money to the rest of the group regularly. And that’s exactly what Mr Narayana Murthy did. Apparently, he would send Rs 10 to them without fail as pocket money when he got into IIT Kanpur.

2. Cricket commentary and Narayana Murthy had a close connection

On the show, his friends were seen going back into the past when Mr Murthy was fascinated by cricket commentary. According to them, the whole group would listen to cricket commentary on radio and the esteemed guest would make notes and try to do a brilliant commentator impersonation!

3. Employer-wise, his ideologies are an amalgamation of the east and the west

Be it a clerk or any other employee, Mr Narayana Murthy still makes time to attend any personal events of theirs like a marriage. This is because he believes that ‘all employees have a certain role to play’. To quote him, he said,” Outside the office, I am very friendly with our people. I have had lunches with everybody. My secretary has had lunch (with me) so many times and my driver too, everybody. Because that is a habit that is good in the West. So we have to learn good habits from the West and put them together with good habits from the east, from India. So, therefore, I think we don’t mix up the hierarchy in the office, with social hierarchy. That’s very important.”

4. Narayana Murthy used to ask mind-boggling questions when he was a college student

While his lecturers had only praises for him, one of them remembered how Mr Murthy was one of the only students who was brightest and would ask such fascinating questions, that the teacher would have to go back home, find the answer and give it to him in the next class. I mean have you ever met someone like that, ever? O haven’t. The humble Mr Narayana Murthy, despite his stature, was seen seeking blessings from his teachers who had come on the show, by touching his forehead to their feet. #Respect

5. Sudha Murthy insisted on a co-education college for both the children

On the show, Mr Murthy spoke of how his wife was particular about sending their children to CO-ED colleges in America. According to him, Sudha always felt that ‘interaction’ is a health practise both for men and women. For her, this was the means to build mutual respect as well.

6. The esteemed guest learnt important life lessons during his time in IIT Kanpur

When his assumption of being the smartest student around was corrected in IIT Kanpur, he learned lessons like humility, respect and co-operation. With students as smart as him if not more, life started to look different suddenly, and for better from then on.

The guest’s best pal recollected on the show how he had first spotted Sudha Kulkarni (before marriage) wearing a white saree in the bus he would ride from home to work every day. Also, he added that she was the only female passenger on the bus. Soon, he knew that she’d be the perfect match for Mr Murthy when he saw her reading Kannada books. So technically, it was the liking for books that got them closer and some help from Mr Murthy’s wingman Prasanna, who found him the woman of his dreams.

The Infosys co-founder himself spoke of the date when he revealed what was in his heart for his now-wife. He fondly recollected when he told her what was in his heart and that too in an auto-rickshaw! That’s right! At that time, according to Mr Murthy, travelling in an auto was nothing short of luxury and truly made one feel like a King, for however long they were taking the ride. Yet, Sudha Ma’am didn’t reply urgently and took some time. But as they say, what has to happen will happen the way it is supposed to. To this day, their love and life together is an inspiration to many!

Which fact surprised you the most? Share with us your thoughts and good wishes for Mr Murthy and his wife, in the space given below.

Watch Natasaarvabhowma Starring Puneeth Rajkumar, Rachita Ram And Anupama Parameshwaran, For A Weekend Full Of Fun And Mind-Boggling Twists In The Story, Only On ZEE5