From their fights to their sudden romance-sequences, we love Ammu and Vedanth's jodi because it is selfless and teaches you a thing or two about love! 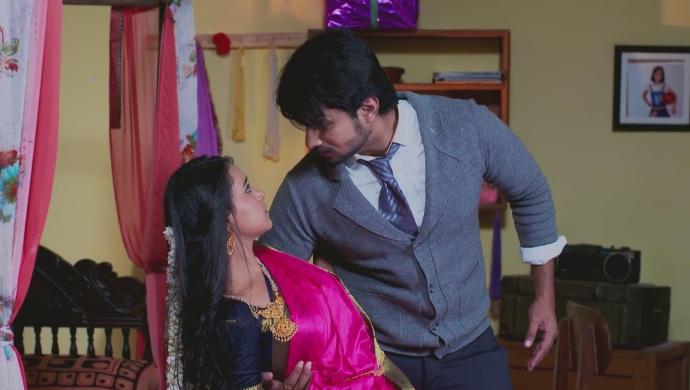 Vedanth and Amulya’s budding romance has been the talk of the town since the show began half a year ago. Nisha Ravikrishnan and Rakshit star in the lead roles as Amulya and Vedanth respectively. The show has gained a lot of fans since then and according to me, it is purely based on their talent and a well-rounded concept of a middle-class girl crossing paths with a super-rich man, who absolutely hates women.

While now after so many months he still hates women, Vedanth has grown close to Amulya and without a doubt, the romance can be seen when these two are in a scene together. Having said that, Vedanth and Ammu are still on fighting terms most of the time and ‘think’ that they hate each other but these following videos will prove to you otherwise. Have fun watching the two onscreen lovebirds…

1. Amulya gives Vedanth an adorable lesson on love and how to be more romantic

2. After fighting with Amulya, when Vedanth blushes he daydreams about her sweet-talking to him

3. During an argument when Vedanth tries to stop Ammu from getting married, the two ‘future; lovebirds find themselves in a romantic moment

4. Vedanth, who awaits Amulya while leaving the Manjunath house, is thrilled to finally see her after the whole marriage incident

5. When Amulya is unable to drink the coffee due to the soap on her hands, Vedanth offers to make her drink it

6. As Aadya had said earlier, when we like someone, we start following their behaviour, Vedanth too exclaims to Ammu, “Ee Vedanth Andre Tamashe Na?“

7. Amulya pranks Vedanth into thinking she has fainted, but the poor guy actually gets concerned about her

Which scene was your favourite from the lot? Don’t forget to let us know why you like these future lovebirds, in the comments box given below.

Naagini's Amrutha Should Be Your All-Time Nail-Fashion Guru. Here Are 7 Pics For Proof