Their constant fights and cute ways to patch up prove they are one of the most endearing couples on TV. Find 11 of Ammu-Vedanth's aww moments here 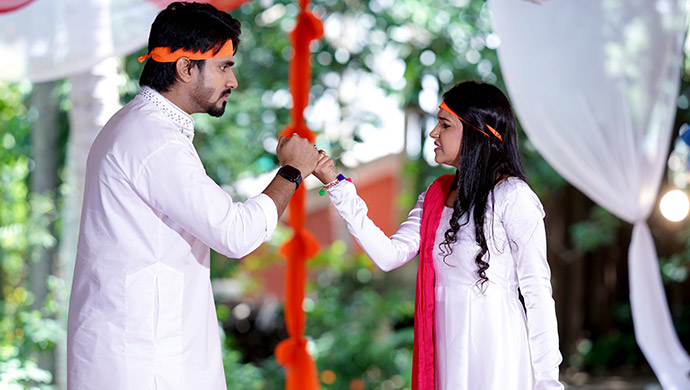 There is no better relationship than that of love and hate between any two people. In this context, Gattimela’s Amulya-Vedanth have thoroughly entertained us since the beginning of the show with their fights, following which they find adorable ways to make up with each other. Nisha Ravikrishnan and Rakshit star as Amulya and Vedanth. Both of them have created magic onscreen with their exceptional acting prowess and cute chemistry. Now in such relationships, there are several awkward moments and quite often, your family or close ones are there to witness them.

In Amulya and Vedanth’s case, there have been far too many such instances and here’s our list of 7 such videos that will make you go ‘oh oh!’…

1. Just look at the way Vicky reacts to this incident taking place in front of his eyes

2. Publicly trying to fix your partner’s fake moustache can be a little embarrassing

3. Hugging your nemesis in front of your siblings is a true sign of love

4. This clip just proved who has the upper-hand in the relationship, but it’s cute nevertheless

5. And when she made it unofficially official… getting the drift?

6. Caught sleeping together the whole night (no, it’s not what you think!)

7. What Vedanth was trying to do and what Amulya thought he was doing. #awkward

While we will keep sharing more such clips of this best onscreen jodi, don’t forget to let us know which video made you go ‘oops’ in the space provided below.

Watch the latest episodes of all your favourite primetime shows on Zee Kannada, streaming here on the ZEE5 platform.

Perfect For The Monsoons, Watch The Lucia-Pair In The Hit Romance-Thriller Beautiful Manasugalu, Streaming Here On Your ZEE5

Aryavardhan And Anu, Stars Of The New Show Jothe Jotheyali, Talk About Their Roles

EXCLUSIVE: 12 Unseen Pics From Naagini Which Prove That Arjun Is Unhappy