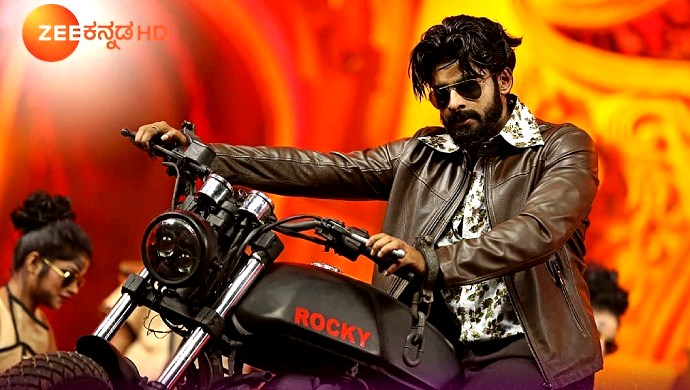 The Hemmeya Kannadiga Awards is a prestigious award ceremony known for its one-of-a-kind accolades. For those of you who don’t know what the title means, Hemmeya Kannadiga means ‘Proud Kannadiga’. All awards, therefore, have a Hemmeya as the prefix. For example, Proud journalist or Proud actor and so on.

This year’s awards ceremony saw some big names added to it which increased the show’s value tenfold. Rocking star Yash, Vinaya Prasad, Rachita Ram and Priyanka Upendra, were a few of the attendees who added the sparkle to the event. Apart from this, we would like to take you through the best moments that took place during the ceremony, in case you missed it.

Making the Kannadiga community proud is the song ‘Namma Naadu‘ sung by the maestro Raghu Dixit and what a performance he and his crew delivered. Watch this clip and feel the Hemme in your heart!

2. Paying tribute to the Martyred Army Officer in the Pulwama Attack 2019

The family of the army officer H Guru (martyred in the Pulwama Attack) was called on stage to appreciate his services to the country. A salute from Zee to all the officers who laid down their lives for Mother India. May their souls Rest In Peace.

3. Appreciating the contributions of Late Rebel Star towards Sandalwood

The Rocking Star Yash along with Sumalatha Ambareesh and many other puttanigalus, the great Rebel Star was paid tribute during the Hemmeya Kannadiga Awards 2019. Click on the link to know what happened.

4. The dimple queen of Sandalwood, Rachita Ram, will make your heart melt

Rachita Ram or the Dimple Queen of Sandalwood will woo you with her dimples alone. Her performance in the Hemmeya Kannadiga Awards 2019, however, is a different story altogether. In this video, you have seen shake a leg for the wonderful audience that was present.

5. Rocking Star Yash reveals the real reason behind his success in KGF: Chapter 1

Along with thanking his most favourite person in the world, for his success in KGF: Chapter 1, you can see the Rocking Star repeating his best dialogue in this clip. Don’t miss it!

6. Host Ramesh Arvind has a fun talk about the prominent icon Sudha Murthy

An adorable lady, who has no qualms doing daily chores with her peers, despite winning the Padma Shri Award. A humble teacher and author, Mrs Sudha Murthy will make you believe in humanity again.

7. Namma Gundamma danced to a folk song and she totally nailed the performance

With the audiences cheering for her, Namma Gundamma from Bramhagantu, aka Geetha Bhat, gave a fabulous performance during the Hemmeya Kannadiga Awards 2019. Watch this clip to see her sakkath dance!

Which was your favourite moment? Send in your choices in the space given below.

Did you watch the finale of Drama Juniors Season 3? Click here to watch it on ZEE5 now!!

If You Are A Patriot, Don't Miss Watching The Kiccha Sudeep Starrer Hebbuli Streaming On ZEE5

From Hariharan To The Lovely Star Prem: 10 Sandalwood Celebs Who Have April Birthdays

Here Are All The High Points Of The Show Paaru From Last Week, In Case You Missed It