Radha Kalyana has made it's debut and we couldn't be more excited to watch another love story. Know about all the important characters of the show! 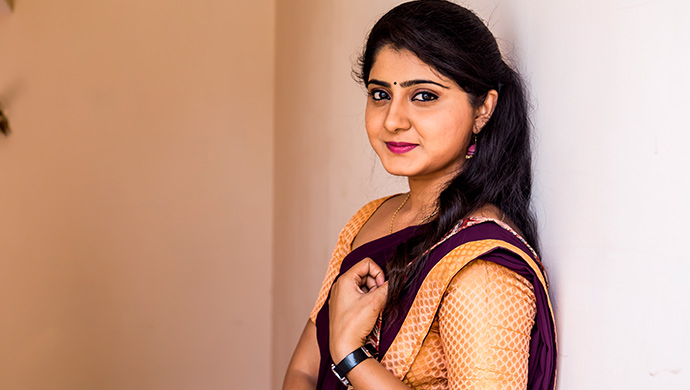 Zee Kannada’s unique selling point or USP as they call it is that the majority of primetime shows are women-centric. From Subbalakshmi Samsara to Gattimela to Paaru or even Kamali, a strong woman protagonist leads these shows and thereby acts as an inspiration of the massive masses of fans. On that note, today one of the newest entrants, Radha Kalyana, came on board to the primetime lineups replacing the superhit show Jodi Hakki. It is a love story between Shri Krishna (played by Amith) and Radha (played by Radhika), two completely opposite characters.

The show will focus on Radha, a calm-natured simple-minded girl hailing from a middle-class family, who meets Shri Krishna, a rude and arrogant spoilt brat and the heir to the Gokula family wealth empire. For the same, today we will look at 5 awesome facts about why you should watch the show and make it your favourite.

1. Krishna is not on Radha’s mind

Unlike the old tale where Radha and Krishna’s love story is famous, Namma Radha wants a husband like Rama. So what will happen when Krishna comes into her life? You’ll know only when you stay tuned.

2. A story based on the concept of ‘opposites attract’

As mentioned earlier, Shri Krishna has all the wealth in the world but doesn’t know the value of love and humanity. On the other hand, Radha, whose financial status may not be great but when it comes to kindness, care, attention and passion, she will get at least 101/100.

3. Both mothers follow the path of devotion and truth

Unlike other shows where one mother (either the hero or heroine’s) is the antagonist, in this show both the mothers are staunch devotees of God and believe that righteousness is the way to go. However, both their mother-in-laws’, Kanapura Kanthamma and Aparna Devi, step in as the antagonists in this show, so it will be damn interesting to see.

While Radha’s step-sister Likitha wants to get married into the Gokula household, Kaushalya’s niece Nakshatra already has her eyes on Shri Krishna. Needless to say, both are antagonists too!

5. For a change, we can see the sibling switch

Ideally, on a show (like Paaru or Gattimela), you will see the younger brother being the careless and irresponsible one. However, in Radha Kalyana, it is going to be the other way around. Here, Shri Krishna is the older one, is a spoilt-brat while Anand, his younger brother, is the more responsible one and is Kaushalya’s favourite.

Let’s wait and watch as to what happens in the few upcoming episodes, shall we?

Watch Natasaarvabhowma, if you are a fan of the Power Star Puneeth Rajkumar, streaming now on ZEE5.

Don't Miss Watching The Celebration Round On Sa Re Ga Ma Pa Li'l Champs Season 16, Streaming In HD On The ZEE5 Platform