The story is the life of various people living their daily lives with different sets of problems to deal with. 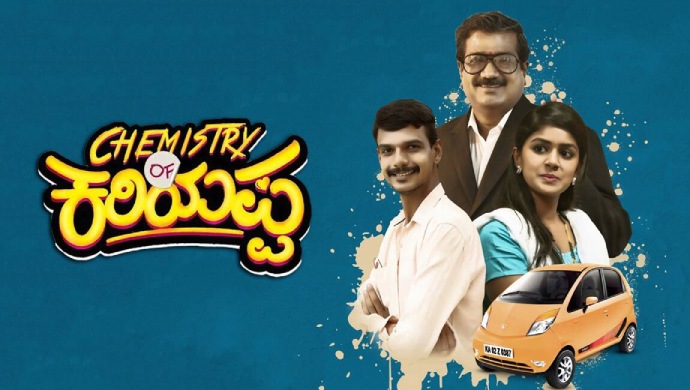 Just like its name, the Kumar directorial Chemistry Of Kariappa is out on ZEE5 to get you laughing uncontrollably. While there is much-anticipated drama hidden in many aspects of the film, the lead cast have done fabulously, talent-wise. Apart from this, the director wanted to keep the elements of this film as realistic as possible, so you can expect the majority of it to be like your daily life.

Most of the films nowadays try to fit every genre in the film and in the process end up finding themselves in a mix, but not Chemistry Of Kariappa. This is one film that has kept the humour and drama aspect in an equal balance to give a direction to the film. Without revealing any more spoilers than we already have, let’s get to the super-awesome reasons why you cannot miss watching this film.

1. The exceptional set of realistic cast

Including Tabla Nani, the entire cast of the film Chemistry Of Kariappa has done an amazing job keeping their character profiles relatable to how we are in general life. The dialogues, the situations and even the emotions like feeling the pressure to get your child married, for example, is something many sets of parents might be feeling. Chandan Achar the protagonist, will make you feel like he’s the boy next door, literally.

Considered as one of the top-ranked films in the year on IMDb is Chemistry Of Kariappa. It stands next to KGF: Chapter 1 on the list so you can be rest assured that it is all about entertainment.

#chemistryOFkariyappa ….. Trailer is out Do watch And Support Guys

3. Based on a real incident

Films in Sandalwood are often based on real incidents and sometimes it works in their favour because of how the cast and crew carry out the film. Beautiful Mansugalu is one such example. So is Chemistry Of Kariappa, according to the director. A great reason to watch it!

4. A film filled with humour and perfect to watch with your family…with a side of popcorn, please!

Yes! Comedy is what keeps us mentally balanced because it helps us laugh and laughter is the perfect way to de-stress. So trust the veteran actor Tabla Nani and go to the ZEE5 platform to watch it, because once you do it will seem like a story of almost every other household. Plus, it is an added advantage to go with your family as it is relatable to everyone.

5. The set of the film – The House of Kariappa!

According to a report in a leading daily, the set; the house in which Kariappa and his family stayed was government property and in fact, a studio apartment office that was converted into a set for the cast to shoot in. I am sure this will drive you to watch it a second time, if you are one of those who likes to check out where and in which places the cast has shot in, like me!

Let us know your reason to watch the film in the comments box below.

Watch the Anup Bhandari film Rajaratha, streaming on ZEE5 to keep the entertainment streak on!

Gattimela 30 April 2019 Preview: Gautham Gets A Shocking News From Vedanth