5 Reasons Why We Already Love The Newest Show On Zee Kannada, Radha Kalyana

Be it Krishna's love for the latest gadgets or Radha's love for helping the needy, here are all the reasons why we already love the show Radha Kalyana 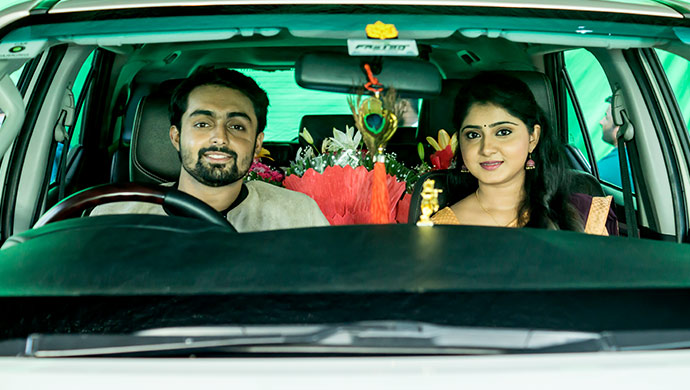 Radha Kalyana is a love story that looks at two contrast characters in life, Radha and Shri Krishna. Radha, played by actress Radhika, is a girl hailing from a middle-class family while Shri Krishna, played by Amith, is the heir to his entire family wealth. Not only this, but even their nature and personality is as different as chalk and cheese. While she is a responsible girl with a kind heart, he is an arrogant and irresponsible spoilt brat who thinks that anyone can be bought with money. Another thing to keep in mind is, it is Radha’s only wish to find a husband like Lord Rama, so how will this love story even begin? To find out we will have to watch the upcoming episodes together.

After following this lovely show for a week, we decided to come up with some cool reasons why we think the show is completely worth your time. Also, the talented actors Radhika and Amith should be given praise for their next-to-flawless performances on screen. Let’s now what according to us makes the show click!

1. The Perfect Setting for a show you can watch daily

Every popular daily soap has a few elements in place since the beginning of the show. There is a Hero, who in most cases is a rich guy who may or may not have an attitude about it, there is a cute Heroine, who is calm and loving to all those around her. If this is the scenario, then there has to be a young villain supported by an elderly villain. With me so far? Radha Kalyana has exactly these plot points and fans have already started loving it.

2. Krishna is the bossman of the latest gadgets

As you must have seen in the episode where Krishna promises to win the dare, he talks to his AI-device friend and speaks to her about his ideal life partner. Not only this, he has everything brand new and latest surrounding his life because he is the bossman aka the heir of the entire Gokula family wealth.

3. Radha is your girl-next-door

Her shyness, kindness and knack for empathy make Radha’s role very relatable. She is someone who will sacrifice her meal to feed the needy, even though she herself is struggling. These are some of the qualities of Radha that make her the ideal girl-next-door.

4. Not only not two but three and a half villains are already set in place

While in many TV serials, there are just one or maximum of two villains, in Radha Kalyana there are almost four. Why almost, you may ask? Well, we know for sure that Kathraguppe Kanthamma is the biggest villain of all who just despises people who are poor, even though she herself has no money lottery anywhere. Next on the list is Nakshatra, Kaushalya’s niece who has her eyes set out on Krishna. She will do anything to ensure she marries Krishna. The next two contenders are part villains. There is Aparna Devi, who turns villain only when someone speaks ill about her grandson, including his own mother. The final contender is Likitha, who is a budding villain under the guidance of her grandmother Kanthamma. Let’s see who has the last say amongst these four, later on.

5. Radha and Krishna’s family are not your typical south Indian families, both sides something is unique

Yes! First, we will look at Shri Krishna’s family. Unlike, in other Zee Kannada shows where the younger son is the mischievous one, in Radha Kalyana, Shri Krishna is the spoilt brat of the family. His younger brother Anand is a kind man with more maturity than his brother. Then we have his grandmother Aparna Devi, who is okay with anything he does, including costing his mother Kaushalya, her legs in a speeding accident. Last but not the least we have Nakshatra, Kaushalya’s niece, who for some reason stays in the Gokula mansion and is obsessed with Krishna.

In Radha’s side of the family, or to rephrase ‘step-family’, she has her father Prasad, who considers himself useless against his mother, her stepsister Likitha and her step-grandmother Kathraguppe Kanthamma. The only real family she has is her ailing mother Tulasi, whose health is deteriorating fast thanks to the constant chores she is asked to do by her new mother-in-law (Kanthamma).

What is your reason to love Radha Kalyana? Let us know your thoughts through the comments box below.

Watch your favourite Zee Kannada shows, streaming now only on your ZEE5.

Do Romantic-Thrillers Appeal To You? Don't Miss Watching The Sruthi Hariharan And Sathish Ninasam Starrer Beautiful Manasugalu, Streaming Now On Your ZEE5