5 Reasons Why Every Racing Fan Should Watch Panchatantra On ZEE5

Namma Bhatru proves yet again that youth-centric movies are his area of expertise. And the film is said to resemble the Hollywood animated film Cars 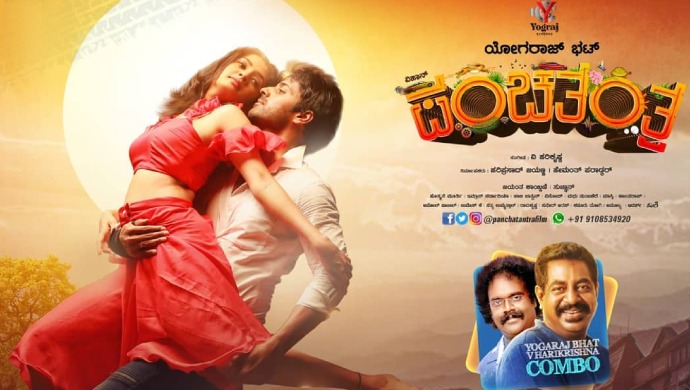 Yogaraj Bhat is one of the most versatile directors in Sandalwood and rightfully so. For proof, his last directorial venture Mugulu Nage, starring the Golden Star had a unique angle and was a hit amongst fans. And Namma Bhatru is back!! His recent film Panchatantra, that released on 29 March 2019, got a good response from the youth which is what the director was aiming at. It is a romantic drama film starring some youngsters of the industry in the lead; Vihan Gowda, Akshara Gowda and Sonal Monteiro. It also has industry veterans like Rangayana Raghu in the mix. So you can definitely expect a classic dash of comedy in the film. All this fun and excitement is going to be available for you to watch in a couple of weeks.

Till then, check out super-cool reasons why you need to set a date with Panchatantra on ZEE5.

1. Namma Bhatre takes the position as director aka captain (of the ship)

From the superhit Mungaru Male fame, Yogaraj Bhat has got another interesting concept to the table. And this time it involves a high-octane car chase! That’s right! More importantly, it has something for every kind of audience. Also, as usual, you will find Mr Bhat mixing and matching when it comes to the cast, but the plot is intriguing nevertheless.

Proving to be a superhit duo for six films, Panchatantra is the seventh collaboration that the composer and director have worked on and we aren’t complaining of course. With brilliant reviews on the musical score front by the fans and industry alike, we can only assume that you will be musically entertained at the least.

Many many Happy returns of the day @yogarajbhatofficial #yograjbhat #Panchatantra

The virtuoso Raghu Dixit got together for a collaboration with director Yogaraj Bhat for the song Neene Helu Mankutimma, and the track is said to have been supported with 8D sound!! Vijay Prakash, on the other hand, has lent his voice to the first song in the film Shrungarada Honge Mara as well as Ee Vayasalli. Apart from this, watch out for a song by the composer too. You’ll have to wait to learn which song V Harikrishna sang on.

Along with his experimental spree with Panchatantra, Bhatre roped in an unusual trio for the film, who of course proved to be a hit together. The male protagonist, Karthik, is played by Vihan Gowda, who was seen in Bigg Boss (2013). He plays a spoilt brat on the movie, according to reports. Next, we have the two female protagonists, Artha and Sahitya, played by Akshaya Gowda and Sonal Monteiro respectively. How these three come together to entertain you for approximately three hours is something you will get to see soon on ZEE5.

5. Panchatantra is a movie for the millennials and you know it

The biggest selling point in this film after Yogaraj Bhat himself will be the most awaited and intensive car-race that actually took place from Mysuru to Bengaluru. With professionals, the race was made to look super authentic and rumours have surfaced that some parts of the movie will remind of you the Hollywood animated film, Cars.

Let us know your reason to be excited for Panchatantra’s digital release, in the space below.

Watch Puneeth Rajkumar’s blockbuster film Natasaarvabhowma, if you like movies with a paranormal angle, only on ZEE5.

Are You A Sumalatha Ambareesh Fan? Don’t Miss Watching Her Film Thayige Thakka Maga On ZEE5 Then