Deepa Bhaskar has dubbed over 250 films. This and other facts about Subbalakshmi Samsara actress you didn't know. 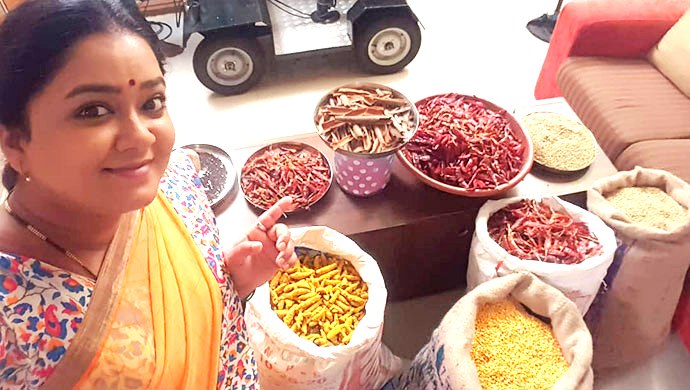 It’s a good day today because it is Namma Subbalakshmi’s birthday today. Deepa Bhaskar, popularly known as Subbalakshmi from the hit Zee Kannada show Subbalakshmi Samsara has given all fans nothing but entertainment till date. While she has just started getting active on social media recently, Deepa is a unique individual in real life with a staunch love for theatre. Unlike her on-screen character, Deepa is extremely happy in her married life and loves her athey the most.

Today on 7th August, i.e, Subbi’s real-life birthday, we bring to you some lesser-known but extremely interesting facts about the actress that will make your jaw drop. Like I mentioned before, unlike her onscreen persona, Deepa is a diverse individual in real life with a belief that all women should be independent. So without further ado, here are the facts…

With an evergrowing passion for theatre, Deepa is not only a TV serial actor but is also into theatre acting, film acting and web-series acting. No, this isn’t a prank, apart from all these roles, she is also a voice artist and a classical dancer.

2. Evidence of an old short-film to prove how good Deepa was even then

This is a short film I was fondly a part of many years ago… due to many reasons it was not on YouTube all these years.. so now that it is out, as 4-5 mins short video.. I will be sharing this for the coming nine days.. please watch and give me your feedback.. PS: this is live sound and not dubbed.. so many dialogues may go unheard.. earphones strongly recommended!

Take a look at this video and I am sure you’ll not only see a different version of Subbalakshmi, but also a very modern one. The film is titled Duri Duri Duggalamma which is a modern tale of husband and wife. Enjoy the watch!

3. Her dubbing venture is more serious than we thought

Deepa has dubbed for a whopping 250 films including Jogi, Mungaru Male 1 and 2, Duniya etc and continues to be an active voice artist even now.

4. She is a graceful classical dancer

Yes! Namma Subbi is a trained Kathak singer and has trained under Sri Nirupama Rajendra and Sri T.D. Rajendra. Not only this, she has even travelled internationally and done stage shows in the United States and the United Kingdom.

Don’t forget to send in your birthday wishes to Namma Subbalakshmi, in the comments box given below.

If You Too Are A Die-Hard Romantic There Is No Way You Can Miss The Fantasy Film Rajaratha Starring Nirup Bhandari And Avantika Shetty. Click Here to Stream It On Your ZEE5 Right Away

Who Is Muni... Vajramuni - The Newest Villain Of Radha Kalyana? Find Out!