If you are having a bad day, these lovely Zee Kannada stars, at this sakkath event will make your pearlies shine bright! 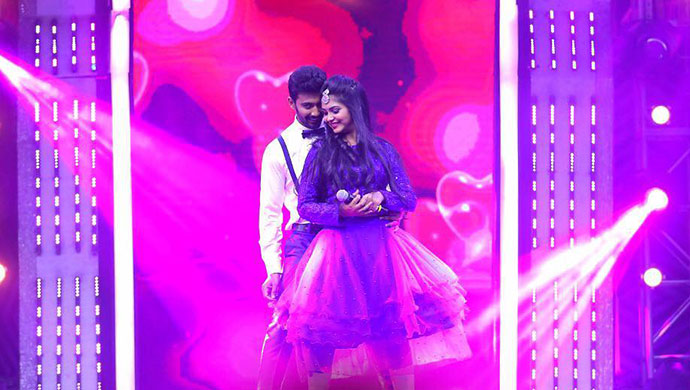 Kamali and Paaru are two shows on Zee Kannada that have brilliant story lineups that are enough for a viewer/fan to get hooked immediately. While Kamali is about a young village girl, who comes to the big city to study in a reputed college, Paaru is about a village girl, who comes to the big city to stay with her father, the driver of a very influential businesswoman. I am sure as fans, I don’t have to indulge more on how much you love the stars. For the same, the makers of these shows decided to treat their fans with a mega-event combining the two shows.

To show how much the stars of the shows love their fans, a Kamali-Paaru Jaatre was organised last weekend. Get ready to turn your frown upside down.

1. An adorable pic of the cast on Zee Kannada including hostess Anushree, having the time of their life

2. There is never a time when Anushree can give you a dull moment on-screen, is there?

3. Namma Rishi Sir in a handsome still while performing on-stage

4. When Sharath dresses as Rocky from KGF: Chapter 1, you know it is drool-time

5. The lovely Paaru in a happy still while performing on-stage

6. Paaru looks like a darling even while not being Paaru!

7. A Tug-Of-War session between the casts of the two shows (Watch the event to know who won)

8. All eyes are on Kamali when she starts shaking a leg

9. Romance is in the air when you see Paaru and Aditya dancing like a pair of love-birds

10. What will you say to this Jodi Hakki?

11. Do you agree that no one else can do a better job in the industry of hosting except Anushree?

12. Kamali’s dance will make you groove to the beats

13. In an attempt to make peace, Preethu from Paaru and Anika from Kamali give a mind-blowing performance.

Which was your favourite moment? Let us know in the space provided below.

Did I tell you that hostess Anushree is the best there is ever? Watch this video to see her winning a prize for it, only on ZEE5.

If You Are A Hemmeya Kannadiga, Watch Kannadada Kanmani Without Fail On ZEE5