Even though the superhit singing show of Zee Kannada has ended, here are some enjoyable videos of the Sa Re Ga MA Pa 2019 winner, Omkar Pattar! 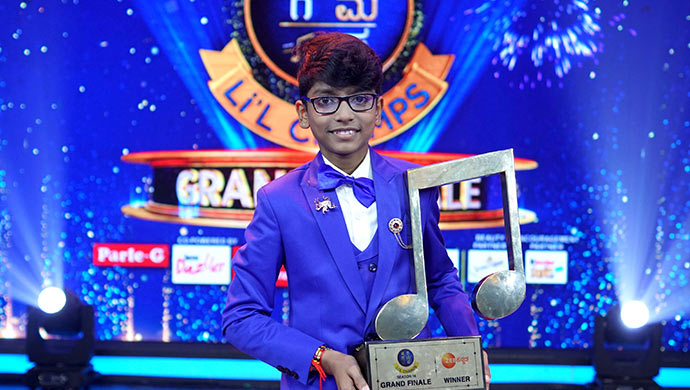 With many joyous moments along with an excellent selection of little singers, Sa Re Ga Ma Pa Li’l Champs Season 16 was probably the best season 4. Firstly, there were two special contestants that we accepted in SRGMP competition; Gnana (3.5-years-old) and Parnika (6-years-old), who just made us go awww every single time they were on stage. Secondly, singers from towns like Raichur, Gokak and Meundi were selected too. After the mega-auditions, the show has literally entertained us for over five months with it’s unique and interesting rounds like the Getup Round, the Superhit Jodi Recreation Round, the Duet Round as well as the All-Time Heroes Round.

Even though the show has ended, we would love to keep giving you small doses of the contestants every now and then. Starting with the winner, Gokak’s Omkar Pattar (14-years-old). The reason why I think he was absolutely deserving for the winner title was because of his ‘folksy’ voice. The advantage of such a voice is that it can be used for any kind of song at all. So without further ado, glide through these 11 wonderful performances of the winner of Sa Re Ga Ma Pa Li’l Champs Season 16, here…

4. How about dressing up as the Crazy Star V Ravichandran to perform on the hit song Nannjaanagoodu Nammuru from the film Putnanja?

5. From the Sharan starrer Victory, watch Onkar perform on Yakka Nin Maglu, like a hero!

6. The duet with Nayana on Hubaliya Sheharadaga from the film Anna Thangi was a blockbuster performance

8. From the D-Boss film Mr Airavata, Omkar sang the power-packed title song with such finesse

9. This is exactly what I meant when I said that Omkar’s voice is versatile. Even a slow song like Kaanada Kadalige from the film Myna was an easy feat for him

10. Another slow song Ambaraveri Ambaraveri from the film Rasika, to soothe your senses

11. One of Omkar’s last performances before the Grand Finale was this power-packed Shiva song

Which was your favourite performance of the young lad Omkar Pattar? Let us know through the comments box below.

For some horror-drama on ZEE5, click here to watch Mummy: Save Me.

For A Fun-Filled Comedy-Thriller Ride With Sharan And Ashika Ranganath, Click Here To Watch Raambo 2 Only On Your ZEE5

Paaru Weekly Recap Of 16-22 August 2019: Will Paaru Succeed In Patching Up Akhila And Adi?