Even though it is the great star's birthday today, we aren't at the liberty to celebrate it and the reason will shock you and make you emotional! 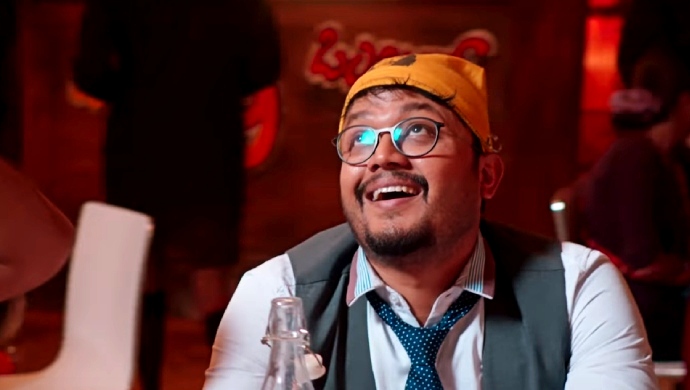 A humble man, precious in the minds of fans and Sandalwood personalities is Namma Golden Star Ganesh. From TV to films like Mungaru Male and Mugulu Nage, Ganesh has achieved fame and love of everyone and rightfully so. He is also one of the few actors who speaks through his talent and sakkath smile in his movies. Born on 2 July 1978, the megastar turned 40 years young today. However, it is not a day to celebrate (as requested by the actor himself on a leading online portal) because unfortunately, the Golden Star’s father passed away a few months ago.

While the actor grieves, we have found out some amazing qualities about this actor from his Instagram handle, and as a tribute to Namma Ganesh, a small presentation is in order…

As mentioned above, for the wonderful Golden Star, his family is his world. To change your mood we chose a happy picture.

2. Ganesh loves hanging and working out with colleagues and friends

Yes! Diganth Manchale and the Golden Star seem so refreshed taking their bicycles out for a spin. Who wants to buy a cycle, like right now?

3. The suave beardo look is and will always be in style for the Mungaru Male actor

Preparing for his latest films, 2019 will be seeing Ganesh in a bearded look in all his films. With ’99’ already released, stay tuned for his next three releases; Geetha, Gimmick and Where Is My Kannadaka?

Only Ganesh can come up with such light-hearted but hilarious memes, and entertain his audience. Tell me, would you forward a meme with your face on it, to the whole world? What a brilliant brilliant man!

5. Smile, because she completes him

Mrs Shilpa Ganesh is surely one lucky woman, or let’s say Namma Golden Star is the lucky man here? Either way, these two make an adorable couple and he isn’t shy to show it!

With his two munchkins, the actor is often seen clicking adorably goofy pictures with both of them. This photo is the biggest proof. I mean the best to introduce your kids to a digital platform, is to share the learning with them.

His staunch love for the country is just heart-melting. From voicing out his opinions about social evils that ought to be removed, to wish all his fans ‘republic day’, the Shravani Subramanya actor makes us proud always.

Whenever you have the time, just go through the actor’s handle. You will find various frames, colours and types of sunglasses worn by him so inspiration? Hello, Golden Star!

9. Did you know that the birthday boy was recently trained for Muay Thai?

Yes! For the shooting of one of his recent films, the actor had to prepare and train himself in Muay Thai and did he do an awesome job or what?

10. Ganesh’s look in his latest Geetha is the talk of the town

Driving around in a cruiser bike, the actor sports a matured look for his soon-to-release film Geetha, also starring Swathi Ma’am from the hit Zee Kannada show Bramhagantu.

Which fact about the Golden Star made you smile? Let us know in the box provided below.

The Shankar Bidari Episode Special On Weekend With Ramesh Season 4 Is About A Great Hero Of The State Who Helped In Nabbing Veerappan! Click Here To Watch It On ZEE5 Now!

Huliraya: Did You Face The Same Problems As Suressa When You Newly Moved To The City?